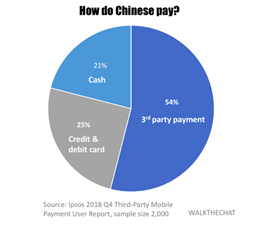 If Libra is widely used for payments, cross-border payments in particular, would it be able to function like money?

With the announcement of Libra, Facebook’s new Digital Currency, it was reported in The South China Morning Post that Wang Xin - a director of the People’s Bank of China (PBOC) – said recently at an academic conference hosted by Peking University’s Institute of Digital Finance “If [Libra] is widely used for payments, cross-border payments in particular, would it be able to function like money and accordingly have a large influence on monetary policy, financial stability and the international monetary system?” China was one of the first countries to look at Digital Currencies back in 2015. Indeed China has enjoyed huge success replacing cash as its economy goes digital. Wepay (owned by Tencent) recorded 460 billion annual transactions in 2018, while Alipay (owned by Alibaba) recorded 197.5 billion transactions.

The widespread use of Alipay has created Yu’e Bao (Chinese for secret treasure), the world’s largest money market fund at $150 billion in size! Merchants use Alibaba’s fully digital C2C and B2C platforms which connect consumers and businesses while providing logistics, payments, and credit facilities. This means that merchants often decide to leave, in effect, their cash flow in Alipay’s Yu’e Bao’s fund.

Possibly, given the fact that daily life for many Chinese people is conduction without using cash, the PBOC does not wish to lose control and see a foreign Digital Currency, especially one backed by non-Chinese fiat currencies such as Facebook, gain too much traction in the Chinese economy. The PBOC, after receiving approval from the State Council, has been working with market institutions on creating a central bank digital currency, according to Wang Xin. However, there have been no public announcements of progress.

Cai Weide, a Chinese professor of Blockchain and crypto, who has worked around the world said “China was “lagging behind and that they should not underestimate the importance of Libra, an invention that, is (one of the) major financial technology reforms in the past 500 years”.

There is no guarantee that Libra’s Facebook will succeed, but the ‘genie is out of the bottle’ causing many organisations and governments to take Digital Assets more seriously, as they begin to understand the challenges and opportunities these Digital Assets offer!