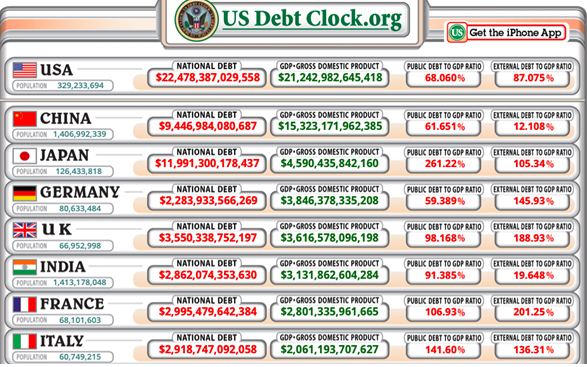 Deutsche Bank finally revealed what the market had been expecting for years, that it needed to reduce its cost base and become leaner and fitter against a backdrop of anaemic global growth.

This has led to Deutsche Bank cutting 18,000 jobs.

In April 2019, Christine Lagarde, Managing Director of the International Monetary Fund, told CNBC that cryptocurrencies and financial technology developments are “clearly shaking” the banking system. She also added, “We do not want innovation that would shake the system so much that we would lose the stability that is needed.”

However, like the story of the emperor who wore no clothes, the real problem is DEBT at a personal, corporate, and national level - and it is a global problem. Furthermore, with historically low-interest rates, the options available to central banks to stimulate economic growth in the event of an external crisis are extremely limited.

To give you a feel for the truly horrific state of affairs of how utterly out of control the debt in most major countries is, look at the US Debt Clock which illustrates in “real-time” how debt mountains are piling up in a selection of the very biggest countries in the world.

While the national debt numbers are a cause for concern, what is truly alarming is the foreign debt - otherwise referred to as the external debt as a percentage of Gross Domestic Product (GDP). This is the ratio between the debt a country owes to non-resident creditors and its GDP. External debt is the part of a country’s total debt which was borrowed from foreign lenders and is, therefore, vulnerable to the confidence foreign investors have in the ability of another country to keep paying its own debts.

The amount of debt owed to foreigners as a % of GDP for different countries has to be of concern - France 201%, Germany 145%, Italy 136%, Japan 105%, USA 87% and Holland with a massive 457 %. Asking for your money back, or not lending an indebted nation any further capital, potentially is one of the levers that foreign investors have in the event of the escalation of trade wars, disputes, and disagreements.

As we have seen, geo-political uncertainties can also trigger an enormous financial crisis e.g. the financial crash in 2008, and was also demonstrated by the spike in the price of oil in the 1970’s and the Wall Street crash in 1929 (which led to the global depression in the 1930s and was arguably the precursor to World War II).

Deutsche Bank estimates that the impact of the U.S - China trade wars has already resulted in over USD 5 trillion from the financial market, and the two largest economies in the world have yet to agree on terms. Given the uncertainty in Europe over Brexit, Greece has just voted-in a government that is going to reverse the spending cuts and tax hikes that it agreed to, as part of its financial bailout. If this leads to Greece getting back into financial trouble, will the Germans agree to bail it out again? Meanwhile, Italy looks to be headed for a confrontation with the European Union as its national debt spirals out of control to over $2.3 trillion (which is the third-largest after USA and Japan!)

It is tragic for the 18,000 Deutsche Bank staff who have just lost their jobs, but already they are looking for new opportunities. Indeed, in the last week, I have personally spoken to a number of banking staff at Deutsche Bank and elsewhere because, as one of them said to me “The writing is on the wall, technology is replacing jobs”, and they are worried about their long terms job prospects. One former Deutsche Bank employee, Medio Demarco, was astute enough to see this ‘writing on the wall’, saying on Twitter that he left his former employer a year ago for crypto. According to his LinkedIn profile, Demarco was employed by the Wall Street bank for two years. Now Demarco is the co-founder of Delphi Digital, which provides research and analysis on crypto.

With the new Fintech start-ups and business that are setting up all over the world, whilst they are creating jobs, they are also exposing the weaknesses of many of the traditional banks and forcing change upon them. These FinTech firms are using technology like Blockchain, AI and Big Data to usher-in new systems and procedures but, in turn, are forcing many of the traditional financial services companies to shed staff in order to try and keep up.

Cryptocurrencies, as Christian Lagarde has mentioned, are a threat to banks. However, one wonders as we see the likes of Facebook with $41 billion (and growing) in cash and short-term investments, talk about Libra being used to help the unbanked, is their real target the broader financial services sector? Indeed, how long will it be before we see other global brands following Facebook and issuing their own digital currency, and so further undermining the need for banks?