In the past, the Bank of England and the Financial Conduct Authority (FCA) would have seemed to be out of step with the UK government. Earlier this year, Rushi Sunak, the previous Chancellor of the Exchequer and now aspiring replacement Prime Minister commented on this when he stated: “It is my ambition to make the UK a global hub for crypto asset technology…”  furthermore adding, “the Treasury has confirmed its intention to recognise stablecoins, digital assets pegged to the price of real world assets, as a valid form of currency.” 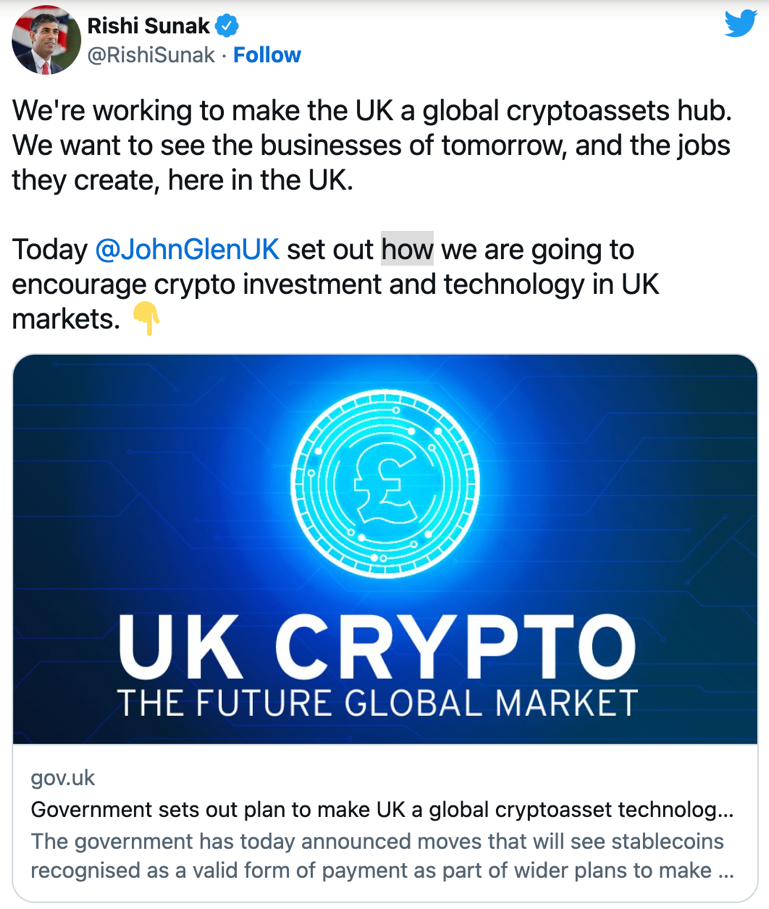 Meanwhile, Nikolay Storonsky, CEO of Revolut, has been frustrated by the FCA “for its tardiness in dishing out a UK banking licence for the firm”. Storonsky has complained that UK regulators were slower to grant regulatory approval compared to other jurisdictions: “I definitely see the process is slower compared to other regulators,” he stated, adding, “I’ll give you an example - so we applied for 48 licences across the globe and we received 44, and three of the licences that we haven’t received are actually in the UK.” Storonsky is not alone, with 80% of firms having applied to the FCA to be on the crypto register now having withdrawn their applications. It seems to many that the Bank of England and FCA have been dragging their feet. The FCA, whilst not regulating crypto assets, keeps reminding the public of the risks and volatility of this assets class (and correctly so). The FCA defines crypto assets to be: “Cryptoassets are cryptographically secured digital representations of value or contractual rights that use some type of distributed ledger technology (DLT) and can be transferred, stored or traded electronically”. This could be interpreted as denoting that firms dealing or issuing NFTs would potentially need to register with the FCA, since NFTs would appear to meet the FCA definition. Meanwhile, the Bank of England is calling for more regulation correctly, arguing that “technology cannot remove all financial risk”. Yet behind the scenes there could, indeed, be more going on than some realise - the stakes are high and furthermore, as the UK economy faces the spectre of stagflation and rising interest rates, the embracing of blockchain technology and the digital assets that they can create could hold some powerful benefits for the country. Estimates suggest that the value of the UK’s goods and services could expand by as much as £41.5bn by 2025 and create a further 678,000 jobs. There are certainly plenty of jobs for those looking to work in the digital asset sector already - the UK is ranked second only to the US with almost 1,000 jobs for people to work on crypto projects being advertised.


Back in April 2021, when announcing that it was going to allow omnibus accounts, the Bank of England’s explanation of these new accounts was that: “an operator of a payment system can hold funds in the omnibus account to fund their participants’ balances with central bank money. This will allow them to offer innovative payment services while having the security of central bank money settlement.” In addition to this, HMRC issued a consultation paper on 5th July 2022 “ to consider if costs could be reduced for taxpayers who participate in DeFi, and could tax treatment might be more aligned with the transactions' fundamental economics thus making tax collection more efficient?” The UK government does seem to be listening to those engaged in digital assets and supporting Sunak’s wishes as it has issued its Financial Services Bill as recently as on 20th July 2022. Included in this are stablecoins, together with how the Financial Market Infrastructure (FMI) Sandbox could be for the tokenisation of real assets and thus issuance of digital securities such as digital equities, debt instruments, commodities and even digital mutual funds. Interestingly, the parliamentary bill would appear to be following the UK’s traditional regulatory approach so, rather than being prescriptive and driven by legislation (which is more common in the US and Europe), it seems to be encouraging parties to be flexible and empower regulators. The bill takes a broad-brush approach including stablecoin service providers such as the issuer, custodians, platforms, exchanges, wallet providers and entities that offer services or support the transfer of money. At the same time, the Treasury has also issued a payments consultation to extend the regulatory scope for payment systems and to include more parties in the payments chain.


This more proactive stance would appear to have been supported by the action itself. The current Chancellor of the Exchequer, Nadhim Zahawi, has announced that the UK plans to be one of the first G20 countries to issue debt instruments using blockchain technology. However, this target has already been met since the European Investment Bank (in conjunction with Banque De France) had issued €100million of bonds earlier this year and, in 2019, the World Bank issued $50million of kangaroo bonds with the Australians. Irrespective of this though is that the UK is a key jurisdiction for financial services and fintech innovation and investment, with over $9billion being invested in the first half of 2022 - second only to the US and more than the entire EU combined. Furthermore, there certainly seems to be no lack of support from the UK Treasury for digital assets. At a recent speech in the City of London, John Glen, treasury minister, said: “If there is one message I want you to leave here today with, it is that the UK is open for business - open for crypto businesses.” The challenge will be how such warm words and positive sentiment toward blockchain and the digital assets this technology can create, will truly foster regulatory clarity and thus encourage further engagement from regulated institutions?