The world was sent into a state of shock when Russia invaded Ukraine on February 24th 2022. Ukraine has suffered inextricable loss on numerous levels with the relentless bombardment of its cities. Ever since, the onus has been on the Ukrainian armed forces to fend off the invaders. But the thing about war is that it is expensive. It takes money to wage one, lots of money. Following the invasion, the President of Ukraine, Volodymr Zelensky, has asked leaders of the world to solidarise with him and come to the aid of Ukraine.

Of note, cryptocurrencies have allowed for the by-passing of institutions that might not allow for payments to Ukraine. Given the fact that martial law has been implemented in Ukraine, bank activities have been suspended. However, cryptocurrencies are good for donations in times such as this since they allow individuals and organisations to directly support causes, cutting off means whereby corruption could thrive. Unlike countries that have banned cryptocurrency and blockchain-related activities, Ukraine had been working on the digitisation of governance (also recently seen with Salvador adopting Bitcoin as legal tender). Ukraine’s Ministry of Digital Transformation, which was established in 2020 and tasked with the advancement of Ukraine’s infotech industry, was recently charged with the procurement of needed equipment in the fight against Russia. The ministry is also charged with gathering cryptocurrency donations. Prior to this, every donation had passed through traditional payment channels. It wasn’t until February 26th, 2022, that the Ukrainian government began receiving crypto donations. The plea for donations was soon posted across different platforms starting from the deputy prime minister, Mykhalio Fedorov’s, Twitter to Ukraine’s Twitter account. Following the success of the donations, there has been a promise for future airdrops as a means to facilitate the long-term support of citizens and organisations worldwide. One can only but wonder what would have happened if Ukraine had taken an anti-blockchain stance as most countries have. Although, the donations received pale in comparison to the sum the US has donated (Biden recently demanded $10 billion authorisation from congress, after America had pledged $350 million) joining many other countries which have offered Ukraine support. 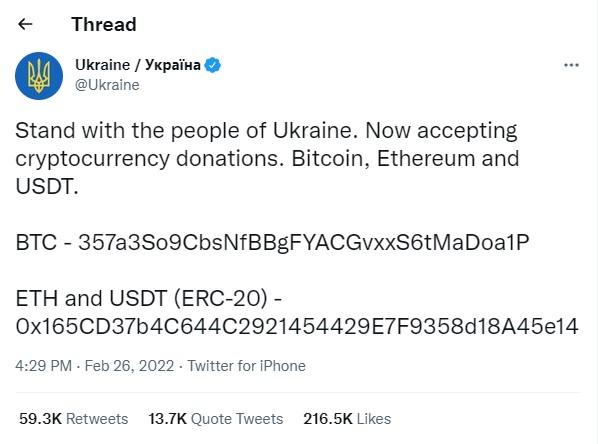 
Insomuch as Putin’s Russia is the cause for the financial situation in Ukraine, it, too, has fallen onto hard times what with sanctions from a vast number of different countries now potentially beginning to cripple its economy. Sanctions usually work by powerful countries curating a list of important businesses and people its inhabitants must avoid having transactions with. Concerning, but ironic, is the fact that cryptocurrencies serve as a means of sanction evasion for Russia, not just as a means for raising donations for Ukraine. Two sides of the same coin and furthermore highlighting the concerns most have about cryptocurrencies. Habitually, in the global finance scene, banks would block transactions from persons under sanction or their business, as can be seen with the UK sanctioning Ibrahimović and what it has meant for Chelsea football club. Previously, the US and western countries had, in 2014, sanctioned Russia for its invasion of Crimea, the result of which was the swift economic change and the yearly loss of $50 billion. But Russia has not been idle since then. The emergence of cryptocurrencies and digital assets has presented a way potentially for it to evade sanctions. The US has been aware of these developments and warned that cryptocurrencies could pose a serious threat to its sanctions, stressing it had a lot more work to do in understanding how these digital assets can be used.


Blockchain, cryptocurrencies or any other technology or innovation are usually neutral, posing as docile tools. Whether technology is good or bad depends on its users. On the other hand, blockchain, when applied to tackle problems with international payments and finance related problems, can also be used to evade accountability, such as Russia is doing. Some of the reasons Blockchain technology and cryptocurrencies are being criticised are the same as the reasons for which they are being adopted. The US is already looking at regulating cryptocurrencies with a new executive order - all in a bid to stem how Russia is evading sanctions. Is there a way or scenario where blockchain enthusiasts and governments leave happy? Not yet. It is worth bearing in mind governments are usually reluctant to regulate technology.