The global economy suffered a huge economic shook in 2020 as COVID -19 enforced a lockdown across the world, compelling governments to take drastic action so as to try and prevent the spread of the virus. International travel came to a virtual standstill as countries, in effect, shut their boarders, together with citizens being told to stay at home as opposed to go to work.

Almost two years later, such travel bans still exist in the second and third largest economies of the world (China and Japan) as their boarders remain closed to the majority of foreign visitors. Meanwhile, in the world’s largest economy (thanks, in part, to huge handouts) the US government has spent $3.5trillion to keep the economy running. With the worst of the covid restrictions now having been lifted, we have seen a new phenomenon, ‘the great resignation’, whereby over 33 million Americans have handed in their resignation since 2021 as they look for better pay, conditions, work-life balance and more working from home. The reasons are varied, but the phenomenon is very real. 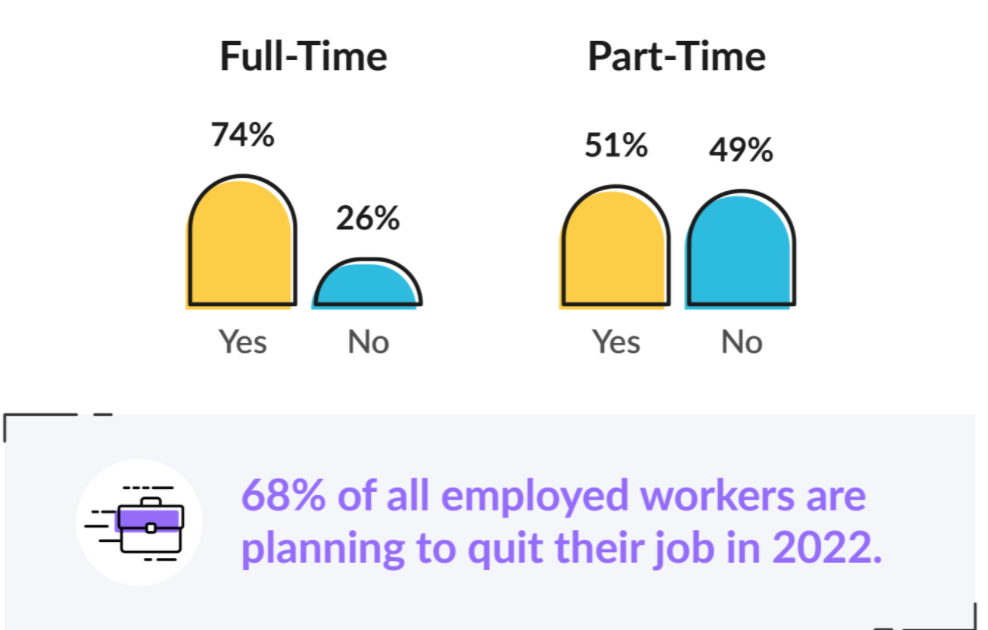 Labour markets are tight as employees struggle to retain staff, let alone attract new ones. This can be seen by global recruiters such as Robert Walters which has reported a surge in profits as employees demand higher wages. Furthermore, there has been a shortage in the number of applicants. Page Group, another quoted recruitment company, has also seen its profits rise as companies struggle to compete to attract the right staff. However, there is another trend that has emerged - workers at some of the most iconic and successful tech firms globally, such as Amazon, Facebook, Google and Microsoft, are struggling to find staff and, indeed, staff are leaving in search of the next new exciting sectors. The world’s most valuable quoted company - Apple - which earlier this year became the first company to be valued at more than $3 trillion is finding it hard to retain staff.


9to5Mac, the publication which closely follows Apple, has reported: “Companies like Apple, Amazon, and more take time deliberating if or how to jump in, fast-moving startups in the crypto space are attracting executives and engineers from the tech giants”. 9to5Mac has also quoted Sandy Carter, who quit as a vice president of Amazon’s cloud computing: “…she posted on LinkedIn she was joining a crypto technology company. She included a link for open positions at the start-up. Within two days, she said, more than 350 people — many from the biggest internet companies — had clicked the link to apply for jobs at the firm, Unstoppable Domains”. The start-up sells website addresses that has created a blockchain-powered platform and is also engaged with NFTs. Of note: “Ms. Carter, said people were interested in working at crypto firms for more than just money. Some were drawn to the ethos of web3, which strives to decentralize power and decision making. It’s an alternative to how Google and Facebook came to dominate the internet by sucking up personal data from users to sell targeted ads”. It is difficult for some of the older tech firms to simply offer more money or fringe benefits when staff are leaving based on fundamental beliefs such as these. This interest in those decentralised organisational structures trying to give people back control over their data together with a more community-based, more inclusive ethos-promoted sectors such as by Decentralised Finance (DeFi), does indeed appear to be gathering momentum.


Sriram Krishnan used to work for Twitter but when he left to join a new tech start up, tweeted: 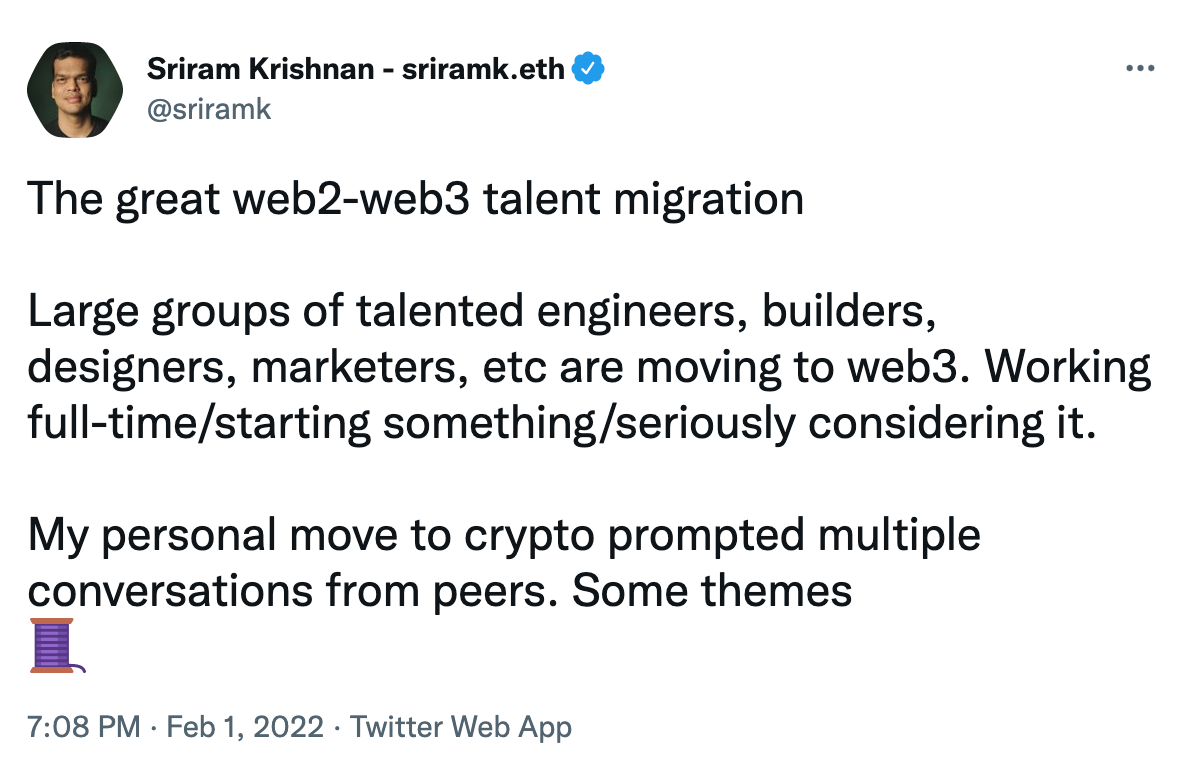 
Krishnan was also reported saying: “As we have had the same central companies dominate the tech landscape for over a decade. There is strong motivation to find a new playbook/space which can help overturn that or where the existing companies don’t have a presence in. I must have personally had at least a dozen conversations over the last week with FAANG/web2 talent at all levels looking to move. This is just the beginning IMO”.


David Marcus, who was head of Facebook’s failed digital currency (and left Facebook) seems to be equally enthused about Web3 on Twitter:


Another example of the attraction of Web3 and staff leaving highly successful existing firms to join or, indeed, set up tech start-ups is the recent announcement of the departure of Alan Chang, Revolut’s chief revenue officer. Chang is quitting Revolut, where he was its fifth employee, to set up a new Web3-focused firm reportedly to be looking to raise $100million. Chang will clearly command a following as, having been at Revolut since 2015, potential investors will be hoping this new venture can emulate the success of Revolut which has seen its value rise to over $33billion currently making it the third most valuable European fintech firm after Klarna and Checkout.com.


Such sentiment may help to explain why Facebook changed its name to Meta (as in, metaverse) and why Microsoft is investing so heavily into this new concept, having spent over $70 billion buying the on-line game developer, Activision Blizzard. As CNBC has reported recently, blockchain-centric firms are hiring staff from the well-established tech firms, enticing them with the pitch of working on the next “big thing” in tech - Web3. For those thinking of joining the ‘great resignation’ and wondering what jobs are available at those companies involved with Blockchain and Digital Assets, this website has over 7,000 positions currently vacant.