For regular readers of Digital Bytes, you will be only too aware we have been writing about rising inflation across the world as the global economy struggles with supply chain challenges post COVID-19. Added to this huge quantity of debt, governments across the world have issued to shelter their citizens and economies from forced shutdowns and isolation polices evident at the height of the covid pandemic.

The recent conflict in Ukraine will serve to add extra pressure on global inflation rates due to further supply chain interruptions, as well as the fact that many commodities both soft (agricultural) and hard (metals and petrochemicals) have soared in price in the last few weeks. We are all well aware, too, that Ukraine has historically been known as the ‘bread basket of Europe”, and as Farming Life has pointed out: “It boasts some of the most fertile land on earth, with rich black soil, chernozem, that is perfectly suited to growing grains. Chernozem is extremely fertile and is known to produce high agricultural yields, thanks to its high moisture storage capacity. Indeed, Ukraine has the ability to provide enough food for half a billion people, maybe more”.


On 22nd February this year, Ukraine’s ministry of agriculture forecasted: “2021/22 exports would have potentially been 33.8 million tonnes of corn, 25.3 million tonnes of wheat and 5.5 million tonnes of barley” yet, given Russia and Ukraine are responsible for in excess of 25% of the world’s wheat exports and Ukraine on its own makes up 13% of all corn exports globally, it is of little surprise that in the first week of March 2022 we saw some of the greatest price rises in these commodities since 1959. Ukraine, itself, is responsible for almost 50% of the global production of sunflower oil and has replaced the US as the largest supplier of corn to China. Both commodities are key ingredients used in many food products and as farmers in Ukraine are impacted by the Russian conflict, or exports are blocked, it is likely to lead to further pressure on prices and thus global inflation. 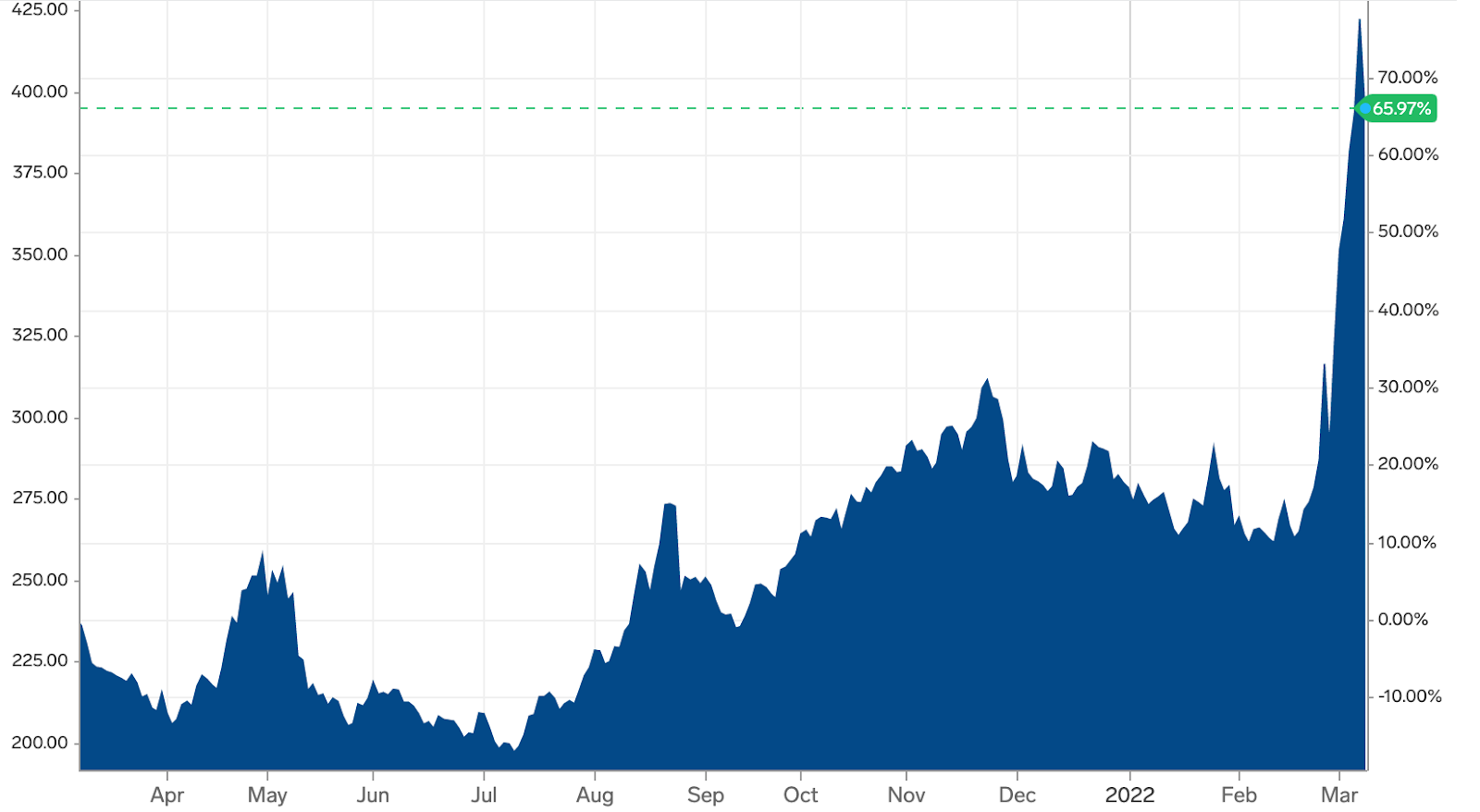 As the above chart illustrates, the price of other commodities has also risen as in the last year this index has increased in price by over 70%. 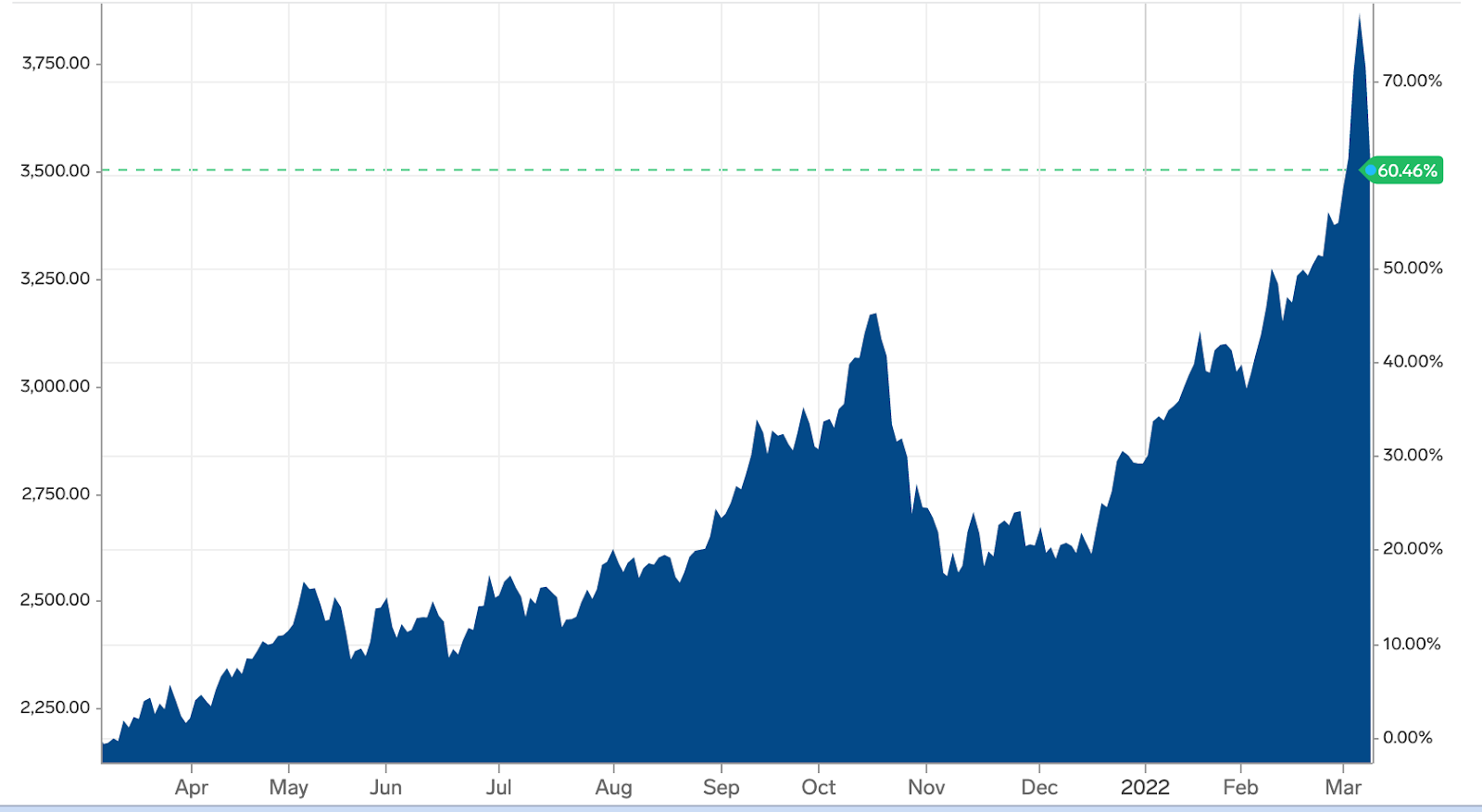 14% of global aluminium production comes from Russia and also 11% of the world’s nickel which is required for the production of stainless steel and used by electric car manufactures. 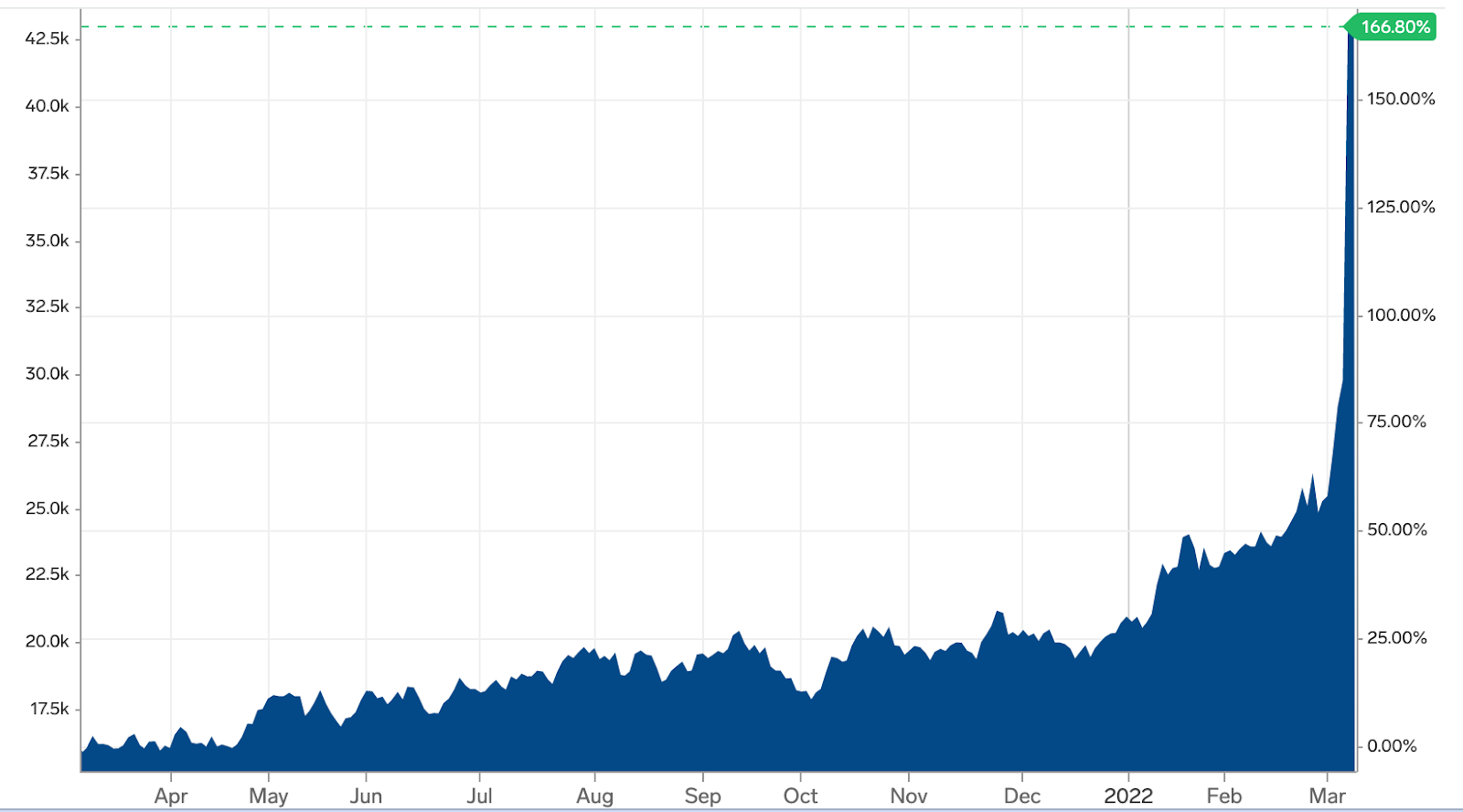 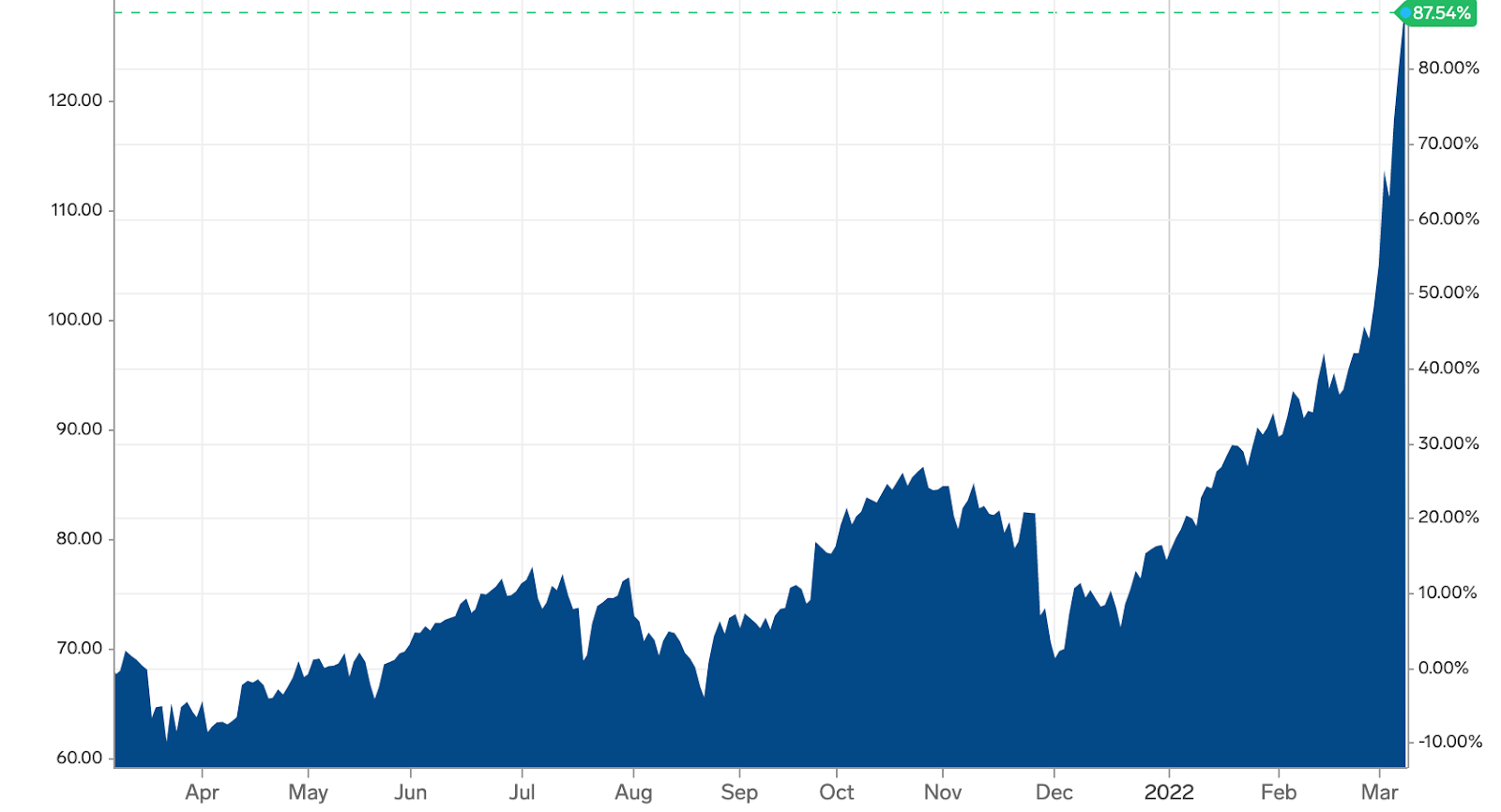 Oil and gas prices were already on the increase and the turmoil in Ukraine in the last couple of weeks has only served to add further pressure. According to statistics from BP: “Russia remained the second largest gas, and the third largest oil producer, ‎accounting for 17% and 12% of the global output, respectively”. Therefore, any restrictions imposed by sanctions (or by the Russians) would have a huge impact, particularly in Europe which is highly reliant on Russian petrochemicals.


The potential impact of the Russian conflict in Ukraine will undoubtedly be felt globally, not simply in terms of higher commodity and energy prices, but also directly by the banks. The Bank of International Settlements data shows that Italian and French banks have the greatest exposure in Europe, with $25 billion of loans to the Russian economy as at the end of September 2021. Austrian banks had $17.5 billion of exposure and US banks had $14.6 billion. In a report from Nikkei Asia, Japan Mitsubishi UFJ, Mizuho and Sumitomo Mitsui have reduced their exposure from 1.6 trillion yen in March 2014 to 539 billion yen. If it were necessary for these three to write the loans to Russia off, it equates to 20% of their combined current expected annual profits.

As well as the price rises, we have seen in commodities and the inevitable disruptions to supplies as a result of the Russian - Ukraine conflict, we need to understand how we can try and avoid other complications caused by those largely centralised economic structures we have historically relied upon. One example is the pricing of equity and debt instruments which are largely based on analogue systems and, in many cases, are listed on one exchange. Yes, some of the larger quoted companies’ shares are listed on multiple exchanges but for the fast majority of 41,000 listed companies globally, they are traded on one exchange. If, for whatever reason, the exchange that a share is quoted on is closed (as is the case in Russia), there are no prices. Thus it is not possible to trade the shares or even correctly price a fund that the shares are held in.


However, if the securities were digitised and traded on multiple exchanges, not only could one trade 24/7 but, in the event of one exchange being shut, other exchanges would still be able to trade. This would avoid asset managers being obliged to stop trading, as we have witnessed with BlackRock as it suspended all dealing on its Russia funds. There is uncertainty as to why it made this announcement almost a week after the Russian stock market was closed. It does make you wonder what prices BlackRock had been using to allow any trading before the announcement was released. Not being able to make a price on Russian securities has also forced the creators of index fund, MSCI, to withdraw Russia from its emerging markets fund.  Presumably, any asset manager who is trying to track the MSCI emerging markets index would be unable to create or redeem units for investors as they would not be able to offer a fair/correct price due to not being able to buy or sell Russian shares.


Meanwhile, it is worth bearing in mind that two of the reasons that financial services regulators globally have been established are to:


It is fundamental that we learn from the past and strive to embrace technology where it is able to reduce risks (particularly in regulated markets) in order that we can maintain trust and confidence. Global trade has encouraged many countries to reply on the cheapest location to source goods and given scant regard to the consequences of what would we do if some unforeseen event happens. COVID-19 and now the Russian - Ukraine conflict will no doubt encourage a different and, hopefully, more resilient mindset.