“Inflation is Europe is the highest it has been since the Euro began.”

These are just a couple of headlines currently bringing attention to the growing inflationary pressures. The price of commodities as recorded by indices such as CRB and S&P GSCI and the cost of moving goods around the globe, which can be seen by an index such as Baltic Dry, are closely watched by governments and central bankers. The trend of indices such as these three are often followed as a key indicator to watch when determining whether to change interest rates.


Therefore, it will not have gone unnoticed that inflationary pressures have been rising in 2021 and, given the recent hike in energy prices, the cost to move goods around the world will have added to these inflationary pressures. As energy prices rise, there is an impact on the cost for fertilizers (as can be seen from the chart below) and certain agricultural produce is diverted to making ethanol whereby reducing the amount for sale as feed stocks for animals and food for humans, therefore raising its price and so increasing inflation. 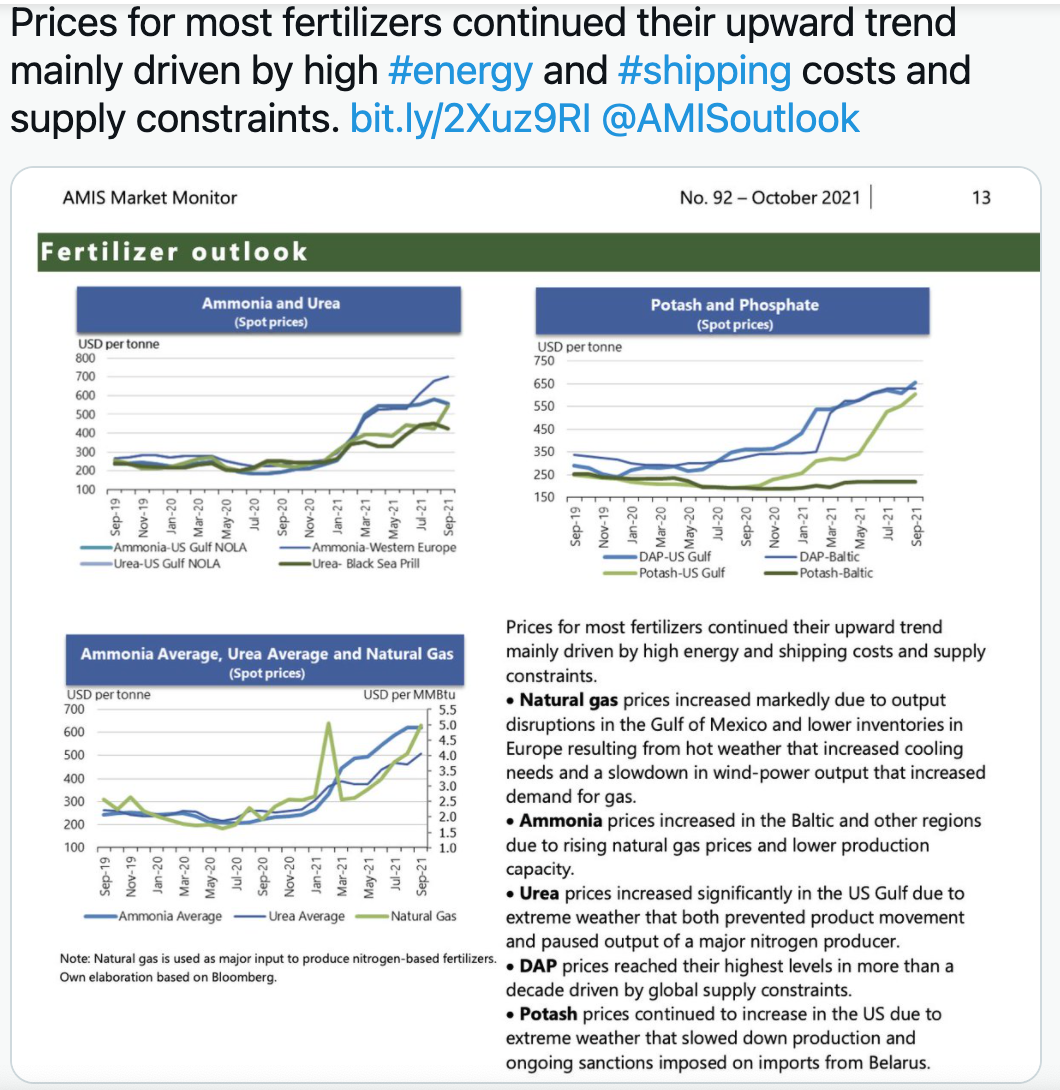 
According to the fund manager, Cazenove, US equity markets have enjoyed a total return (share price growth and dividends included) of over 4175, having risen for over 9.5 years and making this the longest ‘bull market’ for equities ever. But even those who do not follow stock markets daily know that nothing continues to rise forever. At some stage we will see a fall in share prices, which is actually the reason many less sophisticated investors tend not to invest in stocks and shares for fear of the fact that prices do, indeed, fall as well as rise. There is a genuine concern that, given the levels of debt governments have taken on especially due to the massive handouts due to COVID-19 together with the levels of borrowings by companies, the impact of rising interest rates could well prove fatal for some companies. According to analysis from Retire Before Dad, there are now only four companies in the S&P 500 that are net cash positive and, as the list below reveals, most are not exactly household names nor are they exactly trading on low Price Earnings ratios (P/Es).


Therefore, the question has to be - where will investors place their capital in the event that interest rates are forced to rise thus undermining bond prices (which have performed so well as quantitative easing has crushed yields and driven up bond value) and potentially triggering a fall in stock markets? Historically, real estate, precious metals such as gold and silver have performed well when inflation rises. However, thanks to a much more globally interconnected world economy, much of which is conducted on-line, the speed at which asset prices can change is fast. Added to this, we now have a new range of digitally traded assets that do not respect traditional national boundaries and countries but offer investors the ability to trade 24/7/365 and are competing for investors’ capital as never before.


In the last year we have seen tremendous growth in capital being allocated to assets such as Non-Fungible Tokens (products traded on De-Centralised Exchanges). In a survey of US crypto investors, 55% of them had bought cryptos for the first time in the last year of which 91% of whom had sold their Bitcoin holdings, had done so at a profit. The summary from the Royal Bank of Canada offers some insight to just how far the adoption of crypto assets has come.


Blockchain technology has been accused of being unscalable and not able to handle the number of transactions compared to the volume of transactions that Visa or Mastercard cope with. Well, just one blockchain (Ethereum) seems to have proved the naysayers wrong. Even national institutions such as the British Museum are involved with NFTs, and even sports such as rugby and the German Bundesliga are engaging.


It is right and only healthy that we will see a correction in the price of equities and bonds, and when this happens investors will typically look for non-correlated assets and/or assets that may have little capital growth but can offer inflation proof returns. The traditional home of index- linked bonds will no doubt attract some capital, but just how much money will flood into DeFi products such as liquidity mining, staking and yield farming? As investors shy away from traditional stocks and shares will they peruse other assets by buying NFTs in the real world we inhabit, or in the Metaverse in which some of the biggest and arguably most successful companies such as Microsoft and Facebook are now so actively engaging ? Whilst Digital Bytes does not offer investment advice, it could prove very prudent to at least have a better understanding of how to buy and sell some of these digital assets. Open an account with a very, very, very small amount of money, see for yourself the challenges and opportunities and then decide yourself if these assets are for you or not.