The history of world reserve currencies since 1450 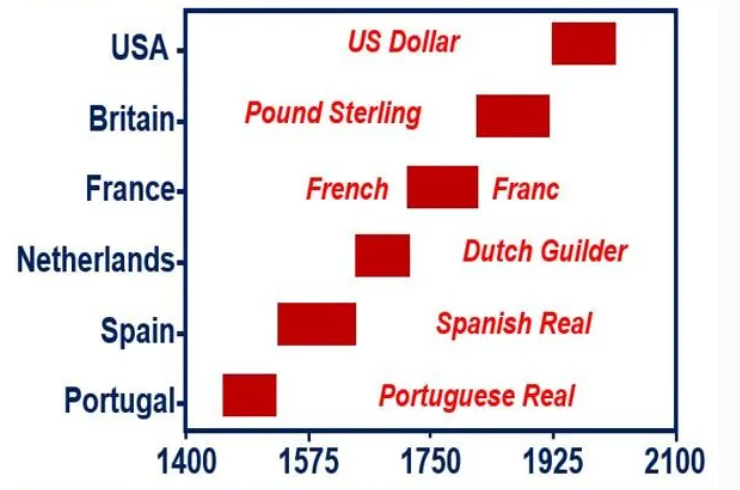 
The average currency tenure as a world reserve currency is 94 years with the US$ having been the world’s reserve currency for roughly 100 years. So, what will come next? If we go back to 1862, there were 7,000 different types of US$ in circulation; 5,500 of which were fraudulent. So in 1863, the National Currency Act (which became known as the National Banking Act in 1864) was passed and this determined the US’s dollar, whereby establishing a dual banking system with national and state-chartered bank - the only such system in the world. The actual $ sign is thought to have come from the saying “pieces of eight”, meaning 8 silver peso coins for one Spanish Real, which was then abbreviated to PS. It is believed that this was abbreviated so that the S was on top of the P, producing an approximation of the $ symbol.


Back in 1999, it was thought that the Euro could replace the $ but now, given the rise of the Chinese economy, some have suggested that the Chinese Yuan has ambitions to become the world reserve currency. Certainly, the Chinese have made huge economic progress and the official launch of their new digital currency at the Beijing Winter Olympics in 2022 is set to radically alter the way payments are made domestically. We will have to wait and see whether the Chinese start asking for payment in their new digital Yuan for their exports. Perhaps the Chinese will insist that users of the harbours, airports, railways, roads and bridges that China has constructed as part of its  Belt and Road initiative be paid for in their new Digital Currency?


Facebook certainly shook central bankers out of their slumber in June 2018 when announcing that it was looking to launch its Libra digital currency (now renamed Diem). Given Facebook’s 2.8 billion monthly users, it certainly has the global distribution to gain widespread adoption, but governments and their central bankers have not seemed as keen. It has, however, encouraged over 80% of those institutions to initiate their own research into the whether they ought to have their own digital currencies. Also interestingly, Amazon was advertising on LinkedIn earlier this year for the position of ‘Head of Digital Currency and Blockchain’, although the post is now no longer available. Notably, in a row over fees, Amazon has just flexed its financial muscles and will be banning its customers from using Visa as of January 2022. The technology to create Digital Currencies certainly exists. Look at Nigeria with its e-naira - so how long will it be before we have a Digital Currencies being issued by multinational corporations? In terms of the actual infrastructure, Mastercard has announced it is planning to enable 20,000 of the financial institutions to accept digital currencies. Meanwhile, the French supermarket Casino, (with 11,000 outlets in Europe and Latin America) has already launched EuroL, which is a euro-backed stablecoin with the cash held by Société Générale. Casino intends to use the EuroL as part of its customer loyalty program, a precursor as another huge potential market for digital currencies. Even more recently, the Commonwealth Bank of Australia is to allow it customers to use the bank’s app to buy and sell digital currencies - including cryptos!


This surely raises the question, are we to see the launch of the Amazon coin, given it was advertising for a “Head of Digital Payments “ earlier this year and the recent spat with Visa? Amazon’s revenue was $110 billion (Q3 2021), so assuming that 20% of this is paid via Visa at a cost to Amazon of 0.1%, that potentially equates to $88million p.a. of fees. If Amazon were to have its own digital form of payment, how much of this $88million could Amazon save? Thus, will we see Amazon issue its own $-backed digital currency? This could allow it to pay its dividends digitally, it could even get its suppliers to use its new Digital Currency and or use it as part of a loyalty program in the same way that Casino in France are looking to do.


After all, a 100%-backed digital currency is safer than leaving your money in a bank, since at least you know your digital money is backed ‘one for one’ with cash. Compare this to depositing money in a bank which then lends cash to its clients as it leverages the bank’s assets, i.e., ‘fractional banking’. And who knows if the banks clients can repay their loans, especially if interest rates start to rise? Therefore, if you have billions in cash such as Amazon, how safe is the money in the bank?


There is, therefore, a very real possibility that we will witness a return to hundreds of digital currencies being issued by multinational corporations in $, €, £, Yen, CGF, etc, and potentially return to a time, such as in the 1860’s in the US, where the dollars you used were all about the credit worthiness of the institution issuing the currency and less about the $ sign itself. The implications for such a scenario are massive since it could potentially aspirate liquidity in financial markets and severely undermine fractional banking (and therefore the ability to borrow money) - unless we see DeFi filling the gap, in which case banks have even more to be worried about!