There is growing concern about the impact that some blockchains have on the environment. As Environmental Social and Governance (ESG) credentials are progressively coming under investor and government scrutiny, organisations are increasingly asking how efficient your blockchain is.

“The world uses over 170,000 TWh of energy per year, that means that the entire Bitcoin network, at its peak estimated consumption level, uses less than 0.1% of the world’s energy consumption. That’s for a network with 100+ million estimated users” is a quote from SwanBitcoin and, according to the University of Cambridge Bitcoin Electricity Consumption Index, the Bitcoin blockchain network consumes approximately 80 terawatt-hours of electricity annually - roughly equal to the annual output of 23 coal-fired power plants or close to the electricity required by Finland each year. 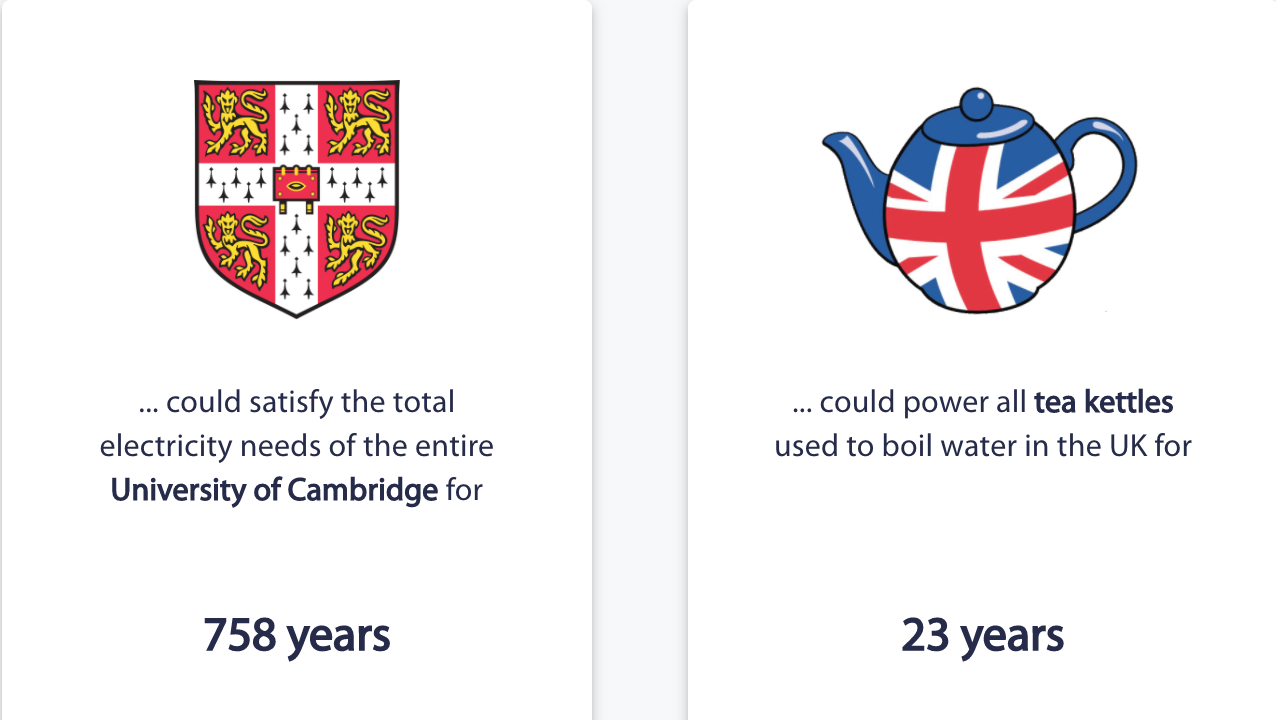 
Bitcoin, with its Proof of Work (PoW) method of operation, compared to other blockchains that use Proof of Stake (PoS), is clearly much less efficient when it comes to measuring the amount of energy PoW Bitcoin uses to record a transaction. However, it is worth remembering that the amount of energy that Bitcoin uses is security metric, not speed or transaction metric, thus Bitcoin does not require more energy for more transactions since these 2 metrics are completely independent of each other. University College London’s (UCL’s) Centre for Blockchain Technology has recently carried out a survey to look at different PoS blockchains and their energy consumption.


The Global Energy used per Blockchain

Whilst the above examples use less than a 1/3 of the energy of Bitcoin, Dr Paolo Tasca, from UCL’s Centre for Blockchain Technologies, asserts: “However, through this research, we have found that not all proof-of-stake networks are created equally. This is something that both investors and adopters need to be wary of when selecting their network of choice.” He also advises to be mindful of the potential environmental impact of Ethereum 2.0 since it may well prove not to be as eco-friendly and efficient as some claim it will be. Furthermore, UCL found that a permissioned PoS blockchain consumed even less energy compared to permissionless blockchains, so this could be a key factor when considering which blockchain to use. Also, despite the energy required by blockchains to operate, UCL reported in its conclusion that: “POS based systems could even undercut the energy needs of traditional central payment systems, raising hopes that DLT can contribute positively to combatting climate change”. In order to address the amount of energy required to power the Bitcoin Blockchain, new more energy-efficient protocols are being harnessed. One of these is Lightning Networks which is being used for payments and for messaging, such as by Sphinx Chat (similar to WhatsApp).


The challenge is that the more security that is required from a Blockchain and the faster you need a transaction to be processed, the more energy will be expended. Other factors impacting the amount of ESG of a blockchain include the hardware that miners and nodes use, together with the % of renewable energy that is used to power a blockchain (which is why 76% of crypto miners use renewables as part of their energy mix.) As ESG credentials are increasingly a focus so, too, will be the thorny question for blockchains to answer regarding how energy-efficient they actually are. In theory, this ought to lead to more attention being paid on measuring blockchains’ energy use and, in time, to the creation of more energy-efficient solutions …..