We have had a number of readers concerned about rising inflation and who have asked – “Can Bitcoin really offer protection against inflation?” As ever, the answer to such a question remains uncertain and only time will tell if we do, indeed, see the vast amount of cash which has been pumped into the global economy result in a sustained increase in inflation. Notably, the FED has recently confirmed that inflation is likely to rise and be persistently higher than was anticipated, and for longer than was expected just a few months ago. It is worth remembering, though, that the current fiat-based currencies are only 50 years old. On the 15th of August 1971, US President Nixon, in effect, ended the 25-year-old Bretton Woods system by no longer enabling one to convert US$ into gold. Fifty years ago, many jurisdictions’ national currencies were pegged to the dollar and in reality the US’s actions ended a gold-based system which had been the norm before. Today, as more and more people question the sustainability of fiat-based currencies, Jim Reid at Deutsche Bank, has summed up the current situation in a thought-provoking manner: “Interestingly, today crypto is starting to build up the strong passionate advocates that gold has had in the past. It also, however, attracts ridicule and disbelief. Whatever happens going forward, views, orthodoxy and money systems do change over time. Fiat money has only been the dominant framework for a small fraction of history and as such it shouldn't be too controversial to suggest it may not always be the system of choice. With endless structural deficits and extraordinary levels of money printing, we have certainly stressed its flexibility in recent years. Will there be a point when it breaks rather than bends?”

Of note, Bitcoin has rallied from $40,000 to over $58,000 in the last few weeks and the US’s largest bank, JP Morgan, believes this recovery is due to “the re-emergence of inflation concerns among investors and they are trying to use Bitcoin as a hedge”. Furthermore, JP Morgan claims the three reasons helping to explain Bitcoin’s recent price pick up are that:


Certainly, Bitcoin’s recent rally has helped it to out-perform gold. One the challenges that Bitcoin  and other cryptocurrencies face is that they are still a relatively difficult asset class for many institutions to invest in. After all, gaining access and safely holding Bitcoin requires specialist knowledge for private investors too. According to the Australia Financial Review, a survey of 2768 people in Australia found 23% of respondents wanted their pension funds to include crypto assets and, of the 5134 people who already owned crypto assets, 67% wanted to be able have cryptocurrencies as part of their pensions and savings. Millennials were found to be the most eager for crypto-exposure in their pension funds, with 40% of respondents born between 1981 and 1996 agreeing or strongly agreeing that superannuation managers should include this asset class.


According to Canada-based company, Goldmoney: “The implications and prospects for fiat currencies’ purchasing power is dawning on the millennials who half understand the monetary problem. It has yet to dawn on the wider public…..Chasers of the crypto money mirage would do well to dismiss the hype and inform themselves properly about money. Gold has been true money throughout history, always re-emerging when fiat fails. No fiat, no electricity, no bitcoin”. What with the cost of energy prices rising, a lack of labour due to high unemployment, and on-going supply chain challenges creating shortages of goods, it is easy to see why we could see inflationary pressures mount. As ever, the key to a successful portfolio is diversification - hence we are likely to see inflation hedge old favourites such as gold and real estate to attract investors’ attention as well as Bitcoin.


Custodians by assets under custody 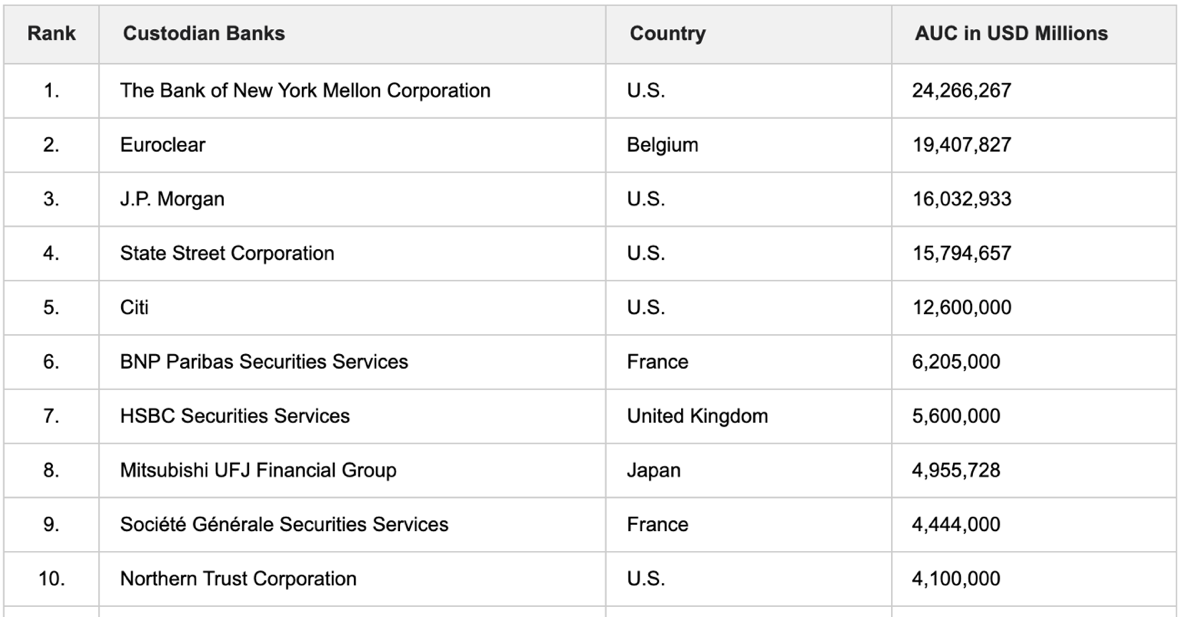 
Banks are increasingly coming under pressure to adopt new business practises and offer alternative products and services as financial markets evolve and further embrace technology, both at an institutional and retail level. With our lives becoming increasingly digitised, there is a growing dependency on IT and machine-based processing as opposed to many of the paper-based analogue systems that historically have been the backbone of banking systems and procedures. For example, there is a growing question as to the current need for custody services which have historically been provided by banks offering to hold assets (such as equities, bonds and commodities) on behalf clients in a safe and secure manner.


Custodian bankers don’t tend to offer what one would class as traditional banking services - mortgages, current accounts or lending services - but have focused on offering institutional services particularly for fund managers. At one level it is rather strange that an investor in a fund managed by Blackrock, the world’s largest fund manager with over $7.1 trillion of assets undermanagement, needs to rely on a third party such as a custodian and not Blackrock for the security of its funds. Financial services regulators, such as the SEC in the US or the FCA in the UK, insist that Blackrock must use an external and independent custodian to actually hold the assets e.g. the equities or bonds in a fund. This adds to the costs of the fund for the investor as well as an added level of complexity and requirement for more records to be checked and monitored, alongside the inevitable queries and time delays in reconciling data. At the time, the requirement for such a system was developed when asset managers were required to physically deal in paper-based assets, and it was extremely difficult to be certain who actually had the physical possession of a share or bond certificate.


Unsurprisingly today, there is the threat of redundancy for this rather archaic way of managing money what with the existence of digitisation of information. The ability to hold data in a very structured manner means that machines can easily track and trace who owns what, and where the assets are held, in ‘real-time’. The application of Blockchain technology and use of smart contracts ensures that many of the current manual checking and monitoring can be carried out automatically. Therefore, it ought to be of no surprise that organisations such as the Depositary Trust and Clearing Corporation (DTCC) has been working with IBM to build a Blockchain-powered platform to handle the current $10 trillion of derivatives that the DTCC handles p.a. Recently, the Singapore financial regulator has granted permission to allow the Asian bank, DBS, and cryptocurrency exchange, Independent Reserve (based in Australia), to offer digital asset services to retail as well as to institutional clients in Singapore. Adrian Prelozny, CEO of Independent Reserve, urged Australians to take an example from the Singaporean “thorough approach to crypto industry licensing”, reminding them that “there are no custodian requirements for the exchanges in Australia”.


For now, those institutions trading and holding cryptocurrencies are required to continue using custody services which helps to explain why some of the largest traditional providers, such as Bank of New York, State Street and more recently U.S. Bank, are now offering digital asset custody services. Although the cryptocurrency market is still relatively small (approx. $2trillion), as we start to see more organisations issuing digitised equity and debt instruments the requirement to use traditional banks to provide custody services may well be increasingly questioned. The potential ability to remove the need for a custodian is an example of ‘disintermediation’, a term often used as a key reason why we are seeing financial markets being disrupted by Blockchain-based platforms. Furthermore, such use of Blockchain-powered platforms offers greater transparency, and therefore trust, which ought to lead to lower professional indemnity insurance premiums and lower costs for the end client. A smaller “Total Expense Ratio” for a fund ought to lead to better performance for the funds held in your pension plans and savings. The use of Blockchain technology also offers compliance departments and regulators, as well as senior management, greater oversight (potentially on a real-time basis). These are powerful drivers helping to encourage the huge potential offered by Blockchain technology. In turn, it raises a further question - will funds investing in Digital Assets in the future use, or even need, the traditional custodians that are so extensively employed today?