A recurring question we receive is: “I thought Blockchain technology was bad for the environment as it uses so much electricity”. So, we decided to analyse how this technology is helping to meet the challenges of climate change. A report from the World Economic Forum (WEF) has illustrated how ‘Blockchain technology can be used to help commodity mining companies reduce their emissions’. The WEF has also published its finding on ‘How blockchain and cryptocurrencies can help build a greener future’. 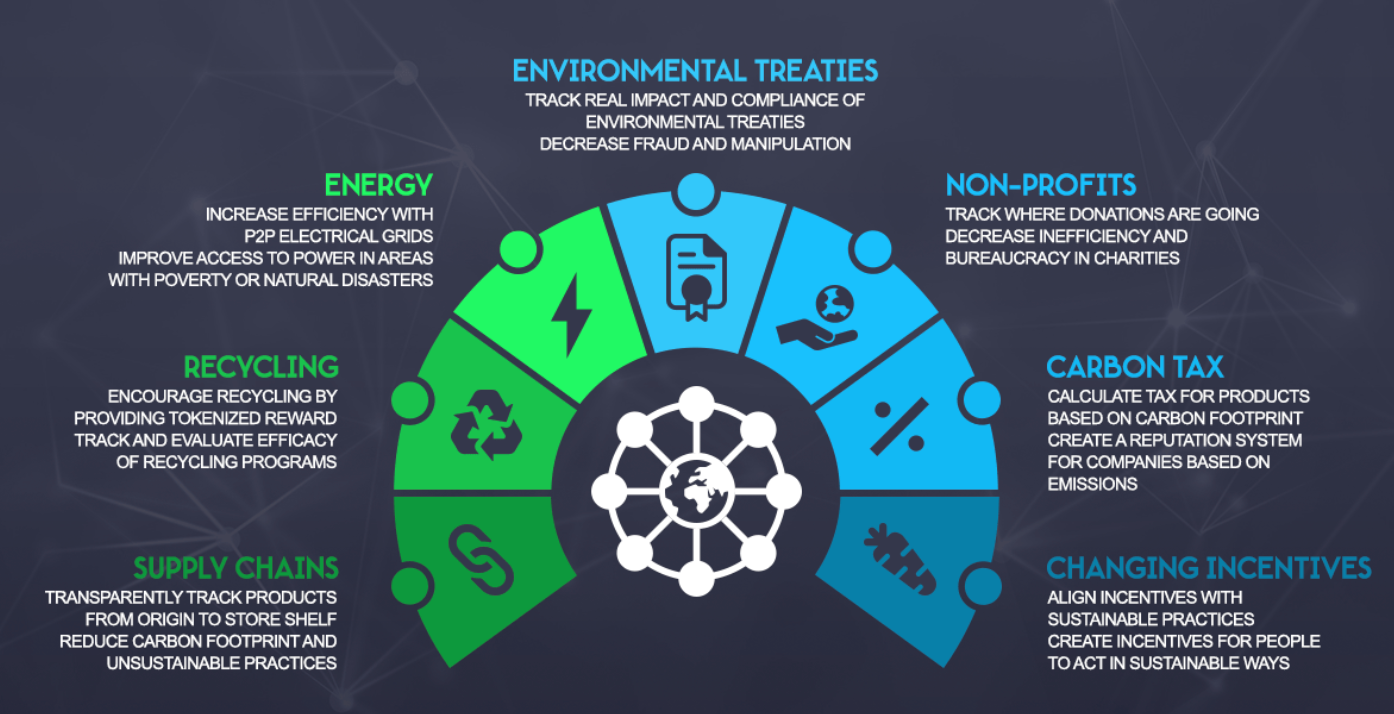 
The website, Future Thinkers, cites seven ways in which Blockchain technology is able to help improve our environment, and we have also given examples of various organisations in each category:

Adelyn Zhou, from ChainLinks labs, recently wrote an article in an WEF publication explaining how smart contracts could help fight climate change and cope with its impact, giving three examples:


i) Regenerative agriculture - incentivise communities around the world to reduce their carbon footprints through more sustainable land-use practices (usually a combination of planting trees and conservation) an example being, the Green World Campaign in collaboration with Cornell University’s Initiative for Cryptocurrencies and Contracts (IC3).


ii) Conscious consumption - smart contracts can also empower environmentally conscious individuals and organisations. As an example, Blockchain-powered energy grids such as the Brooklyn Microgrid Project are using smart contracts to give consumers the ability to produce and trade solar electricity with their neighbours through an exchange which uses a blockchain as a coordination mechanism.


iii) Hedging risk with crop insurance - farmers across the globe (the vast majority of whom are entirely uninsured) are especially vulnerable to changes in weather patterns, be it rainfall, drought, wind, and more. It is believed that 75% of agricultural risks remain uninsured, which has encouraged companies such as  Arbol and Etherisc to offer smart contract-powered crop insurance to farmers across the world.


It is not only the World Economic Forum that is supportive of Blockchain technology, but also the United Nations (UN): “The UN believes that blockchain, the technology lying behind these online currencies, could be of great benefit to those fighting the climate crisis, and help bring about a more sustainable global economy”. The UN has practical experience of working with blockchain projects, having been rolling out its Building Blocks in different countries. Building Blocks enables the UN to distribute money to refugees - directly, securely and quickly - without the need to go through a local bank. It has been successfully deployed in refugee camps in Jordan, enabling the UN to create an accurate on-line record of who has received what, and when. It is thought by the authors of a report commissioned by the UN environment agency, UNEP, that Blockchain technology could also improve the livelihoods of waste pickers, who eke out a living in the informal economy.


Looking back at 2017 and 2018, there was so much hope and promise as to how Blockchain technology could help the 1.8 billion unbanked globally as well as being a force for good to help improve our environment creating a cleaner, fairer economy by breaking down many of the existing ways of doing business. It is encouraging to see from some of the above examples it really would seem that the hopes and dreams of some of the early adopters and enthusiasts behind Blockchain technology are beginning to gather tangible evidence of how this technology is able to make a palpable difference!