The interest in Digital Assets continues to rise and, according to Crypto.com which carried out research on 24 of the largest crypto exchanges, now over 221 million people globally claim to own some form of Digital Asset. The other trend identified by Crypto.com is that the dominance of Bitcoin and Ethereum is reducing, from 67% at the beginning of 2021 to 51% by the end of 6th July 2021, as investors are now buying other cryptos. There are reported to be over 504 digital exchanges with Coingecko having a list of over 489, of which 310 are showing that some form of trading has taken place in the last 24hrs.


Therefore, the number of people holding Digital Assets could be far higher, and this ignores the daily raft of Non-Fungible Tokens (NFTs) being issued. For example, Reuters has reported that Open Seas (one of the most popular NFT exchanges) has seen the volume of NFTs traded on its exchange exceed $2billion in the first half of 2021. In June 2021 alone, Open Seas handled over $18 billion NFT trades valued at over $1billion. The types of assets being ‘wrapped’ in NFTs is very varied, as the chart below shows.


of NFTs sold in various categories Jan -June 2021, on the Ethereum Blockchain


We have highlighted this issue before, but could liquidity in the crypto markets prove to be too irresistible for institutions? Small and medium sized companies (small caps) which are quoted on stock markets around the world have typically been shunned by institutions and been mainly traded by specialist fund managers. Many larger institutions and wealth managers tend not to buy small cap shares directly but gain exposure to this asset class through specialist small cap funds. The reason often cited is the lack of liquidity of small caps therefore making it difficult to invest large sums into a small cap or, worse, not being able to sell small cap shares without substantially moving the price of the underlying shares.


However, there is growing evidence that even cryptocurrencies, which have a relatively small capitalisation, enjoy deep levels of liquidity. For example, it was reported last week that one of the world’s most famous footballers, Lionel Messi, is transferring from Barcelona to Paris St Germain and, as part of his renumeration, Messi is to be paid in PSG Fan Tokens. At the time Messi joined the French football club PSG Fan Tokens were valued at $24.37 with a market cap of $44,815,247. Following the official announcement of Messi’s transfer, the PSG Fan Tokens price climbed to a high of $61.23 increasing the tokens capitalisation to $56million, and the number of tokens traded exploded to almost $630million. Even in the last 24 hours, PSG Fan Tokens are trading at $32.87 and the volume of tokens traded in the last 24 hrs was $49million. With these levels of trading activity, it ought to provide sufficient liquidity for most institutions to buy and sell without adversely affecting the price. A word of caution though, as one needs to be careful about crypto trading volume data since those exchanges which report volumes are not regulated, and occasionally crypto trading can look higher than it really is due to wash trading. But more on this another time….


Another statistic worth keeping an eye on is the value of funds which are held in various Digital Asset Exchange traded products and mutual funds, as these are more accessible to private investors. Coinshares claims that such products now have almost $50 billion of assets undermanagement. 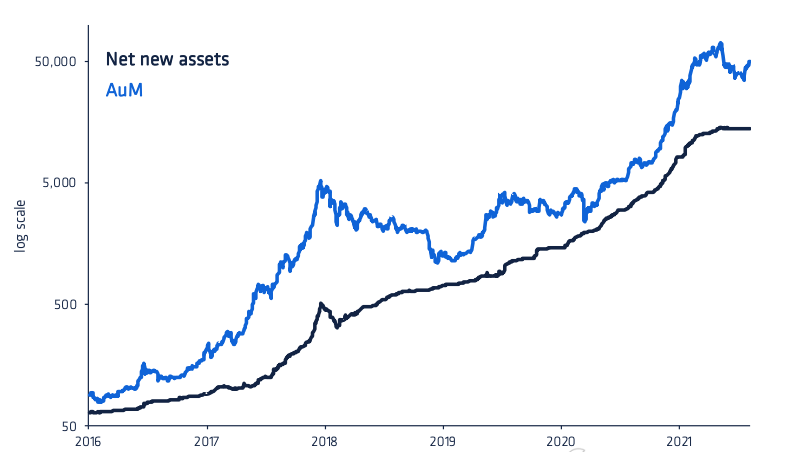 
Coinshares has also reported that in 2021 to date there have been another 37 Digital Asset funds being launched compared to 2020 when 30 such funds were launched. In the hedge funds world PwC claims in its 3rd annual report hedge funds investing in cryptocurrencies to be have almost doubled from $2billion in 2020 to $3.8 billion in 2021. PwC found: “The average AuM for this year’s surveyed funds increased from US$12.8 million to US$42.8 million, while the median AuM increased from US$3.8 million to US$15.0 million. The median crypto hedge fund returned +128% in 2020 (vs +30% in 2019).”  Little wonder why cryptos are grabbing the attention of institutions and their clients with performances such as this.