For those who understand Cockney rhyming slang: “would you adam it?” (adam and eve - believe). If by passing legislation in El Salvador so that Bitcoin is treated as legal tender was not radical enough, the country’s president, Nayib Bukele, has now instructed the state- owned geothermal electricity company to look into mining Bitcoin. 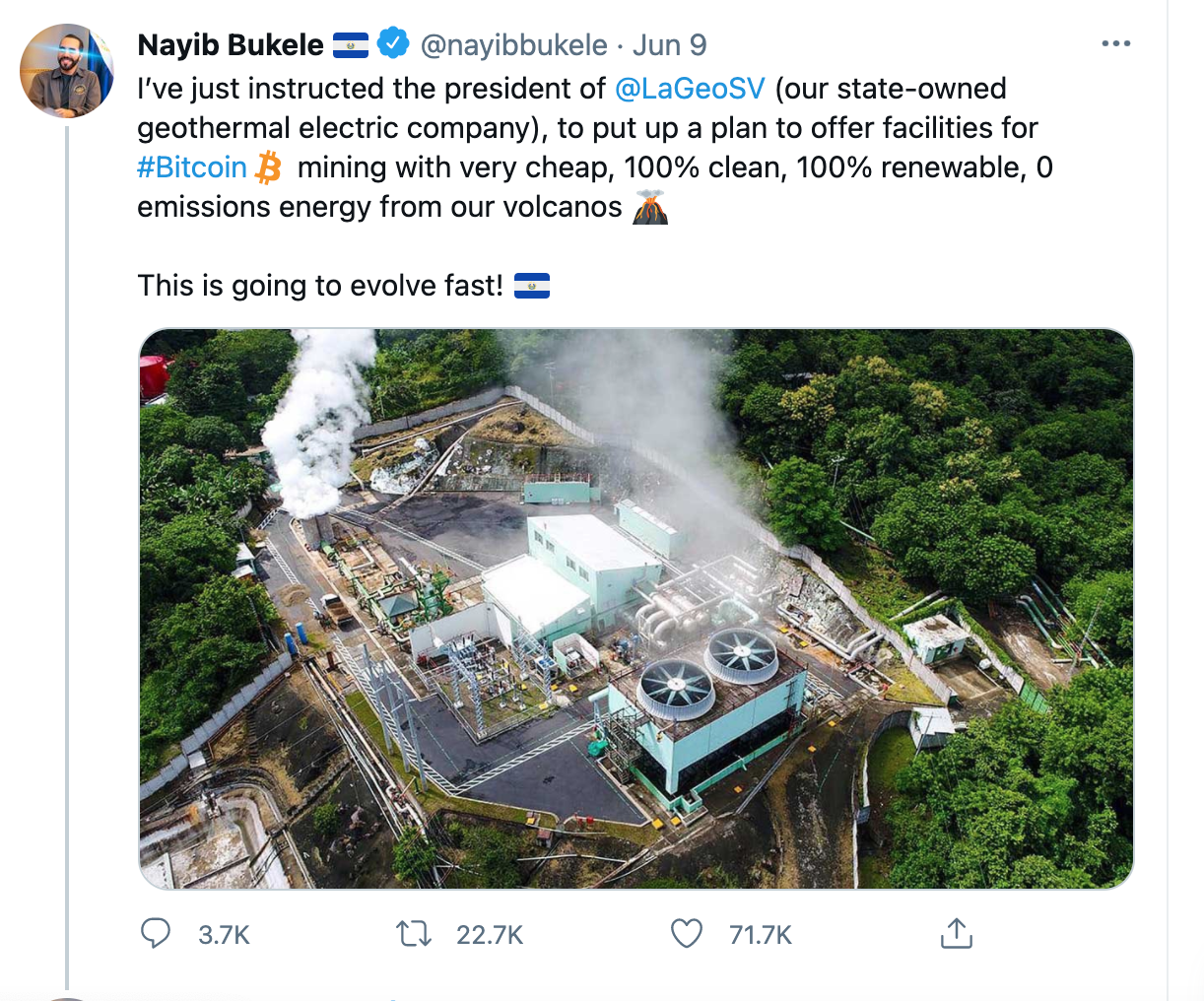 Although El Salvador currently imports 19.23% of the electricity it needs, mining Bitcoin (especially at times when demand for electricity is low) may prove to be an efficient way to harness volcanoes’ geothermal energy 24/7. Will Bitcoin mining using volcanoes prove to be not only an eco-friendly way to make money for El Salvador, but profitable too? No doubt other countries will be watching with interest to see if El Salvador’s embracing of Bitcoin can encourage those who are unbanked and typically excluded from the traditional financial services. If there is a significant uptake by the citizens of El Salvador to use Bitcoin, how long will it be before El Salvador also makes a stablecoin (such as Tether or USDC) legal tender? Will we see El Salvador issue its own digital colón, backed by US$, with deposits either held by the El Salvador government or, to make it potentially more attractive, have the cash held by the IMF or World Bank? Now that would be a coup….


As the below chart shows, according to data from the World Bank the informal economy is significant, not just in El Salvador, but many other parts of the world i.e., there is a considerable amount of cash being used to pay for transactions. The informal economy is estimated to be worth USD 10 trillion, employing about 1.8 billion people globally. As a result, this makes it difficult for governments to balance their books and claim the taxes required to meet the needs of their citizens when there are vast sums of cash being used and no records of what has been paid to whom. Perversely, crypto currencies such as Bitcoin were historically heralded as a way to make payments and by-pass the banks and other financial institutions, yet now we see governments increasingly embrace cryptos and digital assets such as stablecoins and CBDCs. 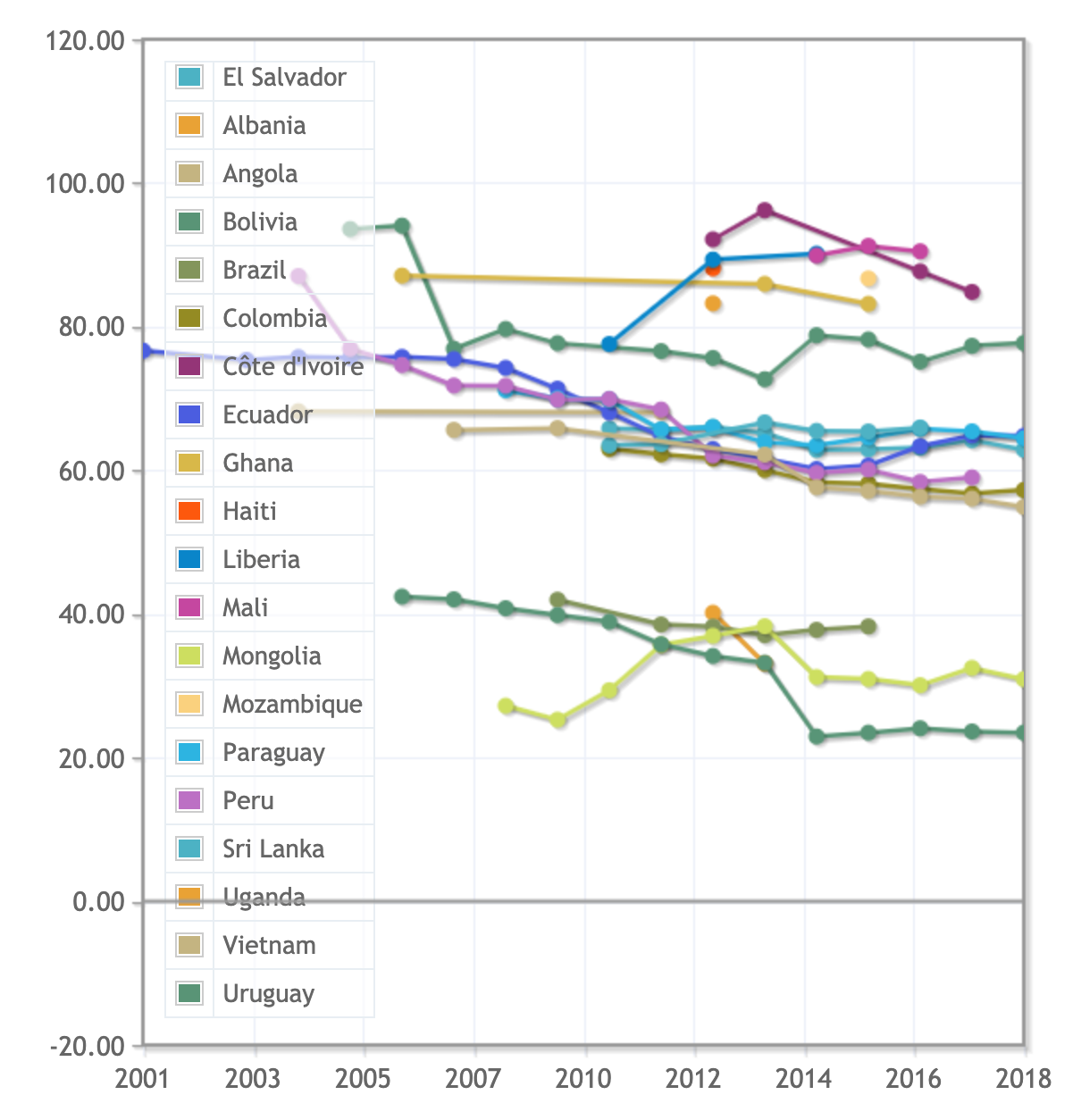 
Another possibility is that other countries and renewable energy producers will increasingly come to realise that Bitcoin mining has the ability to help remove some of the risks associated with renewable energy projects. This possibility exists because surplus energy can be diverted to mine Bitcoin, whereby creating a valuable additional source of income. Mike Colyer, chief executive of Foundry, claims: “This could enable proposed renewable energy projects to havce a faster quicker return on eco-friendly investments, according to the head of one of North America's biggest crypto miners”. Citizens from El Salvador, Guatemala and Honduras are all sources of migrates into the USA. Therefore, instead of spending $millions on a wall between the US and Mexico, the Americans could do well to start investing in green renewable projects whereby enabling these countries to be less reliant on importing energy and, instead, turning them into cheap producers of renewable energy. The use of Blockchain technology could easily track the power being produced and the number of Bitcoins being mined. If the income from the mined Bitcoins could be identified as being spent appropriately, as opposed to being siphoned-off to government ‘cronies’, this would offer greater transparency and therefore encourage further capital for more renewable energy projects. Who would have thought that cryptos could potentially have such a positive impact, not only on a country’s power supply, but the cost of this power, global climate change and also be of help in reducing illegal migration?


As we mentioned in last week’s Digital Bytes, how soon will other countries follow El Salvador’s lead and make digital currencies legal tender? The answer is, potentially very quickly if it helps those countries crack down on the informal economy and support them to become more self-sufficient in terms of electricity production. Indeed, according to Euronews.net: “Following the vote in the Salvadoran assembly, politicians in Argentina, Paraguay, Brazil and Panama took to social media to endorse the decision”.