How long will it be before we see Coinbase using its equity back on the acquisitions trail following its recent public listing on the NASDAQ exchange? Afterall, Coinbase has been growing fast with 35 million users in July 2020 and over 56 million clients - net income of $322.3 million in its 2020 profits and $1.8 billion of revenue in Q1 2021. It is certainly in rude health. Coinbase is no stranger to doing deals with notable acquisitions including Tagomi, a crypto currency brokerage platform, the controversial Neutrino, an intelligence company and  Xapo, an institutional crypto custody specialist firm, to name just a few. Arguably, Coinbase has a better understanding about the outlook and opportunities in the blockchain and crypto sectors than any other NASDAQ-quoted organisation. Coinbase has also been trying to influence politicians in the US, having spent over $700,000 on government lobbying since 2105 and with a bigger ‘war chest’ of cash, no doubt the amount Coinbase spend on lobbying will increase.

Another firm active with crypto currencies is PayPal (currently valued at over $310billion), having announced it will start accepting crypto currencies on its payments platform. In March 2021, PayPal announced it had acquired the Israeli-based crypto custody firm, Curv, for an alleged $200-$300million. According to a report from Bloomberg, PayPal is also interested in acquiring crypto currency companies. BitGo, a digital asset custodian announced in December 2020 that it had over $16billion of crypto assets in custody for institutional clients. Bloomberg’s report showed that crypto mergers and acquisitions had more than doubled in 2020 to $1.1 billion, compared to 2019. The US was the most dominant market with $785million worth of deals. Henri Arslanian, global crypto leader of PWC, believes that 2021 is on track “to significantly surpass 2020 from every single metric.” It would seem that Arslanian is, indeed, correct if you look at the recently announced Crypto/Blockchain VC deals.

In 2020, there were just four venture capital-funded deals worth $100 million, and three deals worth between $50 million and $100 million. Already in the first three months of 2021 there have been six deals worth more than $100 million: BlockFi, NYDIG, Dapper Labs, FireBlocks and Blockchain.com (twice). Seven more were worth $50 million to $100 million. But not all institutions are bullish on crypto since HSBC now prohibits customers from buying quoted companies which hold Bitcoin, such as Square or Microstrategy. The image below is proof of HSBC’s current sentiment towards crypto-related assets.


Message from HSBC to its clients 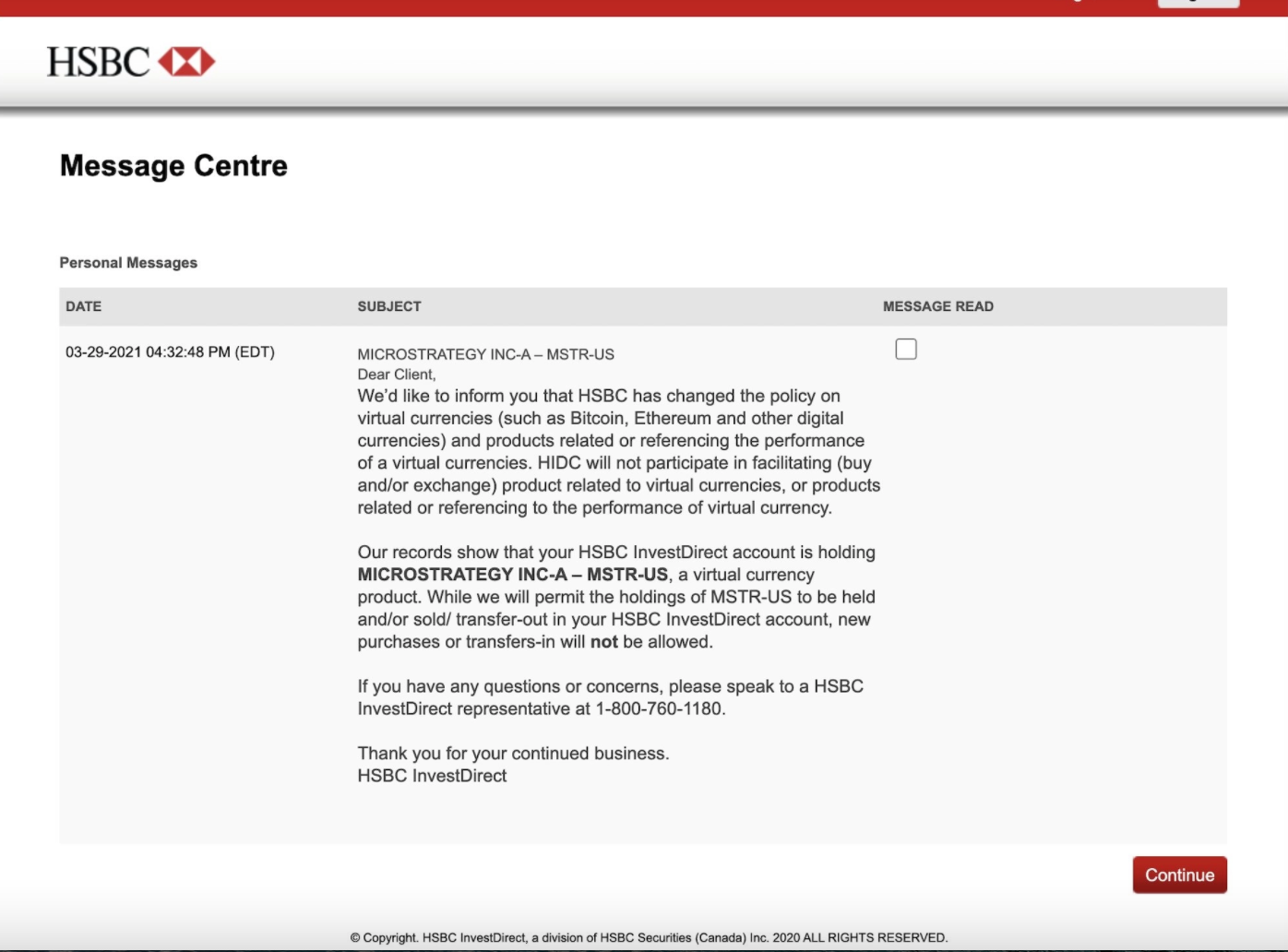 
Surely such a dictate from HSBC to its clients flies in the face of a freewheeling capitalist bank, such as HSBC? Maybe HSBC is now taking a much more cautious stance, having once been found moving vast sums of dirty money and been forced into paying record anti- money laundering fines. One wonders how long HSBC will continue pursuing such an aggressive stance towards crypto or will it, like JP Morgan, end up ‘eating humble pie’ and even begin to back organisations engaged with crypto assets? Afterall, HSBC clearly understands the benefits of Blockchain technology, which gave birth to the asset class of crypto currencies since, back in September 2020, it published a report: “How blockchain could revolutionise bonds”. Furthermore, HSBC’s Digital Vault offers custody of assets including assets such as equity, debt or real estate. HSBC digitises its clients’ holdings whereby enabling customers to check their records without the need to request the paper documentation that maybe required, for an audit, or to check an interest payment for tax returns, for example. The benefit of using Blockchain technology and the digitisation of the records are a lower cost for HSBC and give clients faster access to information.


Undoubtedly, there continues to exists a blurring between traditional institutions and those organisations engaged in crypto assets and, as the size of both the cryptocurrency market and digital assets grow, the boundaries are likely to blur even more. The amount of money being invested into these sectors is ever-expanding as we see the likes of crypto, DeFi, NFT, and the digitisation of real assets (such as equities, bonds, commodities and real estate) become more popular. It is not simply the private sector but the governments with their CDBCs which are equally looking to be part of this new growing ecosystem. This is likely to lead to more and more M&A activity by traditional and more native crypto organisations.