One of the key challenges which has faced governments and organisations (such as the World Health Organisation - WHO) as they fight to control the spread of a pandemic such as COVID-19 is gathering and understanding the colossal amount of data being collected. A number of governments, such as the Brazilians and the Cezchs to name just two, have turned to use Cross Industry Standard Process for Data Mining (CRISP-DM). CRISP was developed in 1996 as a European Union and was led by five firms - Daimler AG, Integral Solutions Ltd, NCR Corporation, OHRA and Teradata. It offered a methodology to analyse data and consisted of 6 steps: 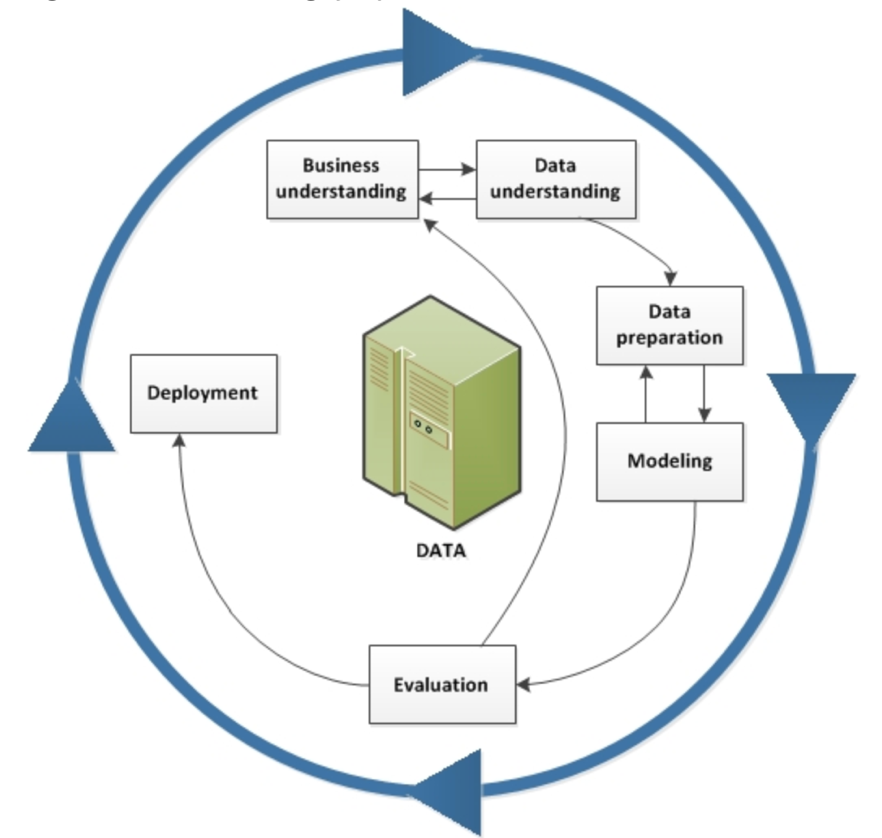 In recent times, analysis of data and use of AI has been used to help diagnose cases of COVID-19 when using Computed Tomography (CT) scans, reducing the time from about 5 minutes to 20 seconds. AI is also being employed to speed up the development of new drugs with one the current pandemic vaccines reaching human clinical trials already in an incredibly short time, as opposed to the usual process which typically takes years.  Likewise, the use of AI has shown to accurately predict which of those patients newly diagnosed with COVID-19 would progress further to develop severe respiratory disease and equally has shown that for some racial minorities certain vaccines are proving to be less effective. Interestingly, a New York University (NYU) study combined Chinese and American research revealed symptoms usually associated with COVID-19, such as certain patterns in lung images, fever and strong immune responses, were not on their own useful in predicting which patients with initial mild symptoms would actually go on to develop severe lung disease.


As a digital record, Blockchain technology is being widely used to fight COVID-19 by creating secure, trusted, and immutable databases, all the while detaching single point of failure in the network by offering greater transparency. For example, as reported by Reuters, UK hospitals have used Blockchain-powered platforms to help track COVID-19 vaccines whereby reducing mistakes that could have occurred had traditional manual systems been used. Blockchain technology is also seen a way to improve global supply chains; we have all witnessed how COVID-19 demonstrated the lack of resilience in the supply of PPE equipment and drugs for the healthcare sector, as was cited by the British Medical Journal. Aligned with this, the World Economic Forum reported: “COVID-19 has highlighted critical gaps and weaknesses in global supply chains. Blockchain technology may offer opportunities to increase trust & transparency - but it's not a silver bullet. Rather, it is part of a broader digitization strategy that must be evaluated and deployed responsibly and holistically”. Another example of the use of Blockchain technology has been in fight against fake COVID-19 vaccinations in Asia. In China, Hyperchain uses Blockchain technology to track donation as well as how the donations are used helping bring greater transparency process.


According to a report from PwC, about 84% of institutions it surveyed are actively involved in using and researching the use of Blockchain technology as, after all, governments and WHO have encouraged people to use digital payment means, including cryptocurrencies, instead of cash to reduce the spread of COVID-19. This may help explain why, according to data by Statista, the number of digital/crypto wallets has risen from a handful in November 2019, before COVID-19, to 68.24 million on February 22, 2021.

As we have said before, Blockchain technology can be seen as ‘skeleton’ off which other data-hungry technology can hang. Increasingly, we are seeing Blockchain-powered platforms being integrated with AI, Big Data, IoT and Machine Learning whereby driving greater efficiencies and accessibility to data in the healthcare market as well as other industries.