The process of being a publicly listed company on the NASADAQ stock exchange has been  initiated in the USA by Coinbase, not via an IPO but as a direct listing whereby saving both  hours of management time carrying out a road show and $millions of fees. Interestingly,  Coinbase is not actually looking to raise capital since it is already sitting on $1billion of cash  and $350 of crypto currencies. Wall Street may look back on the event of this digital  currency exchange becoming publicly quoted as a precursor for a change in the way the  financial services sector is operated. The floatation of Coinbase will bring greater  transparency and trust into how money is being made from digital assets with some of the  brightest analysts pouring over Coinbase’s financials. Furthermore, it is inevitable that  similar firms operating in the digital assets sector will now be sure to follow Coinbase and  become publicly traded too.

Coinbase refers to future the in its prospectus: Tokenise new assets.” The section goes on:  “We will invest in infrastructure and regulatory clarity to pave a path for the digitization of  more traditional financial assets to help pave the path for new assets to be represented as  crypto assets.” This is a clear indication that Coinbase is likely to use its equity to continue

its buying spree of acquisitions (having already executed 16 acquisitions) and, as a public  company, it will no doubt use its paper, not cash reserves. Who knows, maybe Coinbase will  even acquire traditional asset managers, or a bank, and thus further blur the lines between  the traditional finance sector and decentralised finance (DeFif)?

Once Coinbase is publicly traded on a recognised exchange it offers institutional investors a  way to gain exposure to the crypto currency market in a manner that, to date, has simply  not been possible. Also, given the dominance of Bitcoin (accounting for over 60% of the  capitalisation of the crypto market) one could make an argument that the buying of shares  in Coinbase could be seen to be a proxy for gaining exposure to Bitcoin, which is currently  not a permitted asset for UK pension funds. It is of no surprise therefore that as the price of  Bitcoin rises so does the volume of trading in the entire crypto currency market, thus  boosting Coinbase’s profits (although Coinbase is far more than just a way to get exposure  to Bitcoin! 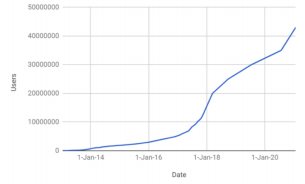 As a crypto currency platform Coinbase states, it has: “Approximately 43 million verified  users, 7,000 institutions, and 115,000 ecosystem partners in over 100 countries”. Meanwhile  in its prospectus, Coinbase claims it generated $1.1 billion of trading income on the $193 billion of crypto trading, (page 107). This indicates that Coinbase generates a margin of  approximately 0.57%, with Bloomberg noting “the traditional U.S. stock exchanges - which  collectively trade more volume in a day than Coinbase does in a year - collect on the order of  0.01% of volume in exchange fees, conservatively. Running a crypto exchange is at least 60  times more lucrative than running a stock exchange”. Indeed, the entire payments world is  changing as increasingly clients are using digital wallets. As ARK Investment Management's analysis has pointed out:” PayPal’s Venmo and Square’s Cash App have amassed roughly  60 million users organically in the last 10 and 7 years, respectively, a milestone that took  J.P. Morgan more than 30 years and five acquisitions to reach.” If ARK is correct in stating  that “a digital wallet is worth conservatively $3650, (the average valuation per US bank  customer at year-end 2019)” this alone means that, with 42 million customers, Coinbase  could command a valuation of $150+billion! 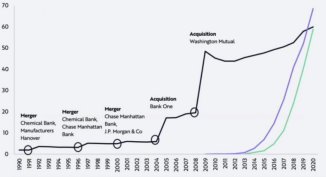 
However, trading and private clients are not the only way that Coinbase is generating  profits. Coinbase charges 0.5% to offer custody for the digital assets it stores for  institutional clients. According to Forbes, in December 2020 Coinbase had $20 billion in  custody but, given that the capitalisation of the crypto market has increased over 3 fold and  that institutions are investing in cryptos, it would not be unreasonable to assume that  Coinbase has $70billion of assets in custody - which at 0.5%p.a. generates $350million of  fees. However, Coinbase’s website claims it has “$90 billion of assets on its platform” which  if all these were to generate 0.5%, it would equate to $450million of fees! This figure seems  almost too high to be believed……

The ability and experience of offering custody for digital assets could prove to be a  significant driver of revenue for Coinbase if we are to see existing assets such as equities,  bonds, real estate, commodities, etc being digitised. We have already witnessed changes in  legislation in Luxembourg and Switzerland which enable the issuance of securities in a  digital format, as opposed to having to have paper documentation, meaning it is now  possible to issue equites in a digital manner for as little as CHF 50,000. However, given the  recent announcement from the DTCC in the US that it is looking to move the settlement of  stocks from two days to one day, surely this could be an added ‘spur’ as regards the  digitalisation of securities in America? The change from a two-day to one-day settlement is  undoubtedly going to necessitate thorough examination of the infrastructure on Wall  Street. Once Coinbase becomes part of the ‘establishment’ (i.e., quoted, and subject to  audits and greater transparency) it increasingly makes commercial sense as to why Coinbase  is looking to become a publicly quoted company.

If indeed Coinbase is valued at $100billion it would potentially account for 0.8% of the  NASDAQ index and be the 26th/27th largest stock in this index, based on current valuations.  Coinbase would almost be the same valuation of US bemouths such as IBM, Goldman Sachs,  GE, Boeing and Morgan Stanley. Each of these well-known firms are valued around $100 to  $110 billion and each account for approximately 0.34% of the S&P500 index. Coinbase truly  has been a huge financial success but there is another company in the digital assets sector that eclipses it. This company is Binance, which some claim to be worth $200 Billion. But  that is a story for another day……!