This is a key theme in Digital Bytes frequently being asked about by readers. Digital currencies have the potential to offer governments a new tool with which to control their economies, help to engage with the unbanked/financially excluded as well as offering the ability of faster and cheaper payments for corporations and individuals.

The Chinese are continuing to roll out their own Central Bank Digital Currency (CBDC). They are once again giving away money, but it can only be spent in those shops determined by the government and with the stipulation to be used by a certain date i.e. not saved - unlike in the UK where on one hand governments have been handing out cash only for UK households to pay down their debts. During the first COVID-19 pandemic lockdown, UK consumers paid off £7.4 billion of debts  The Chinese are also trying to reduce their reliance, together with many of world’s other economies, on the US$. Qian Jun, the chief economist of China’s ICBC International Bank, believes that if we were to see the launch of Facebook’s Libra (now called Diem) or a digital US$ it would further increase dependence on the $. “If Digital Currency Electronic Payment, (DCEP) can seize this historical opportunity and combine it with the ‘Belt and Road’ construction and global value chain reconstruction, it will promote the internationalization of the RMB and the ‘network effect’”. Said Qian Jun.


Meanwhile a subsidiary of Alibaba (which along with Tencent dominates the on-line payments landscape in China) has carried out tests on its mobile app with the Chinese CBDC in Shanghai so, seemingly, it will not be long before China’s CBDC will be launched nationwide.


An estimation by the International Monetary Fund (IMF) is that over 1.7 billion people globally are unbanked. Even in the US, it is calculated that over 8.4 million households do not have a bank account. Within the Hispanic community there are as many as 17% of households un-banked, which makes it complicated and time consuming to give these citizens the financial support they need as a result of COVID-19. A digital currency signifies that money can be distributed and, more importantly for the finances of a country, taxes can be collected digitally since people are increasingly using their mobile devices to pay for goods and services. In terms of saving money, the Diem Association claims it costs 7% to make international payments, taking up to five working days. Compare this to a digital currency where payments are almost instant, and the costs are measured in cents and pence.


The market capitalisation of Tether 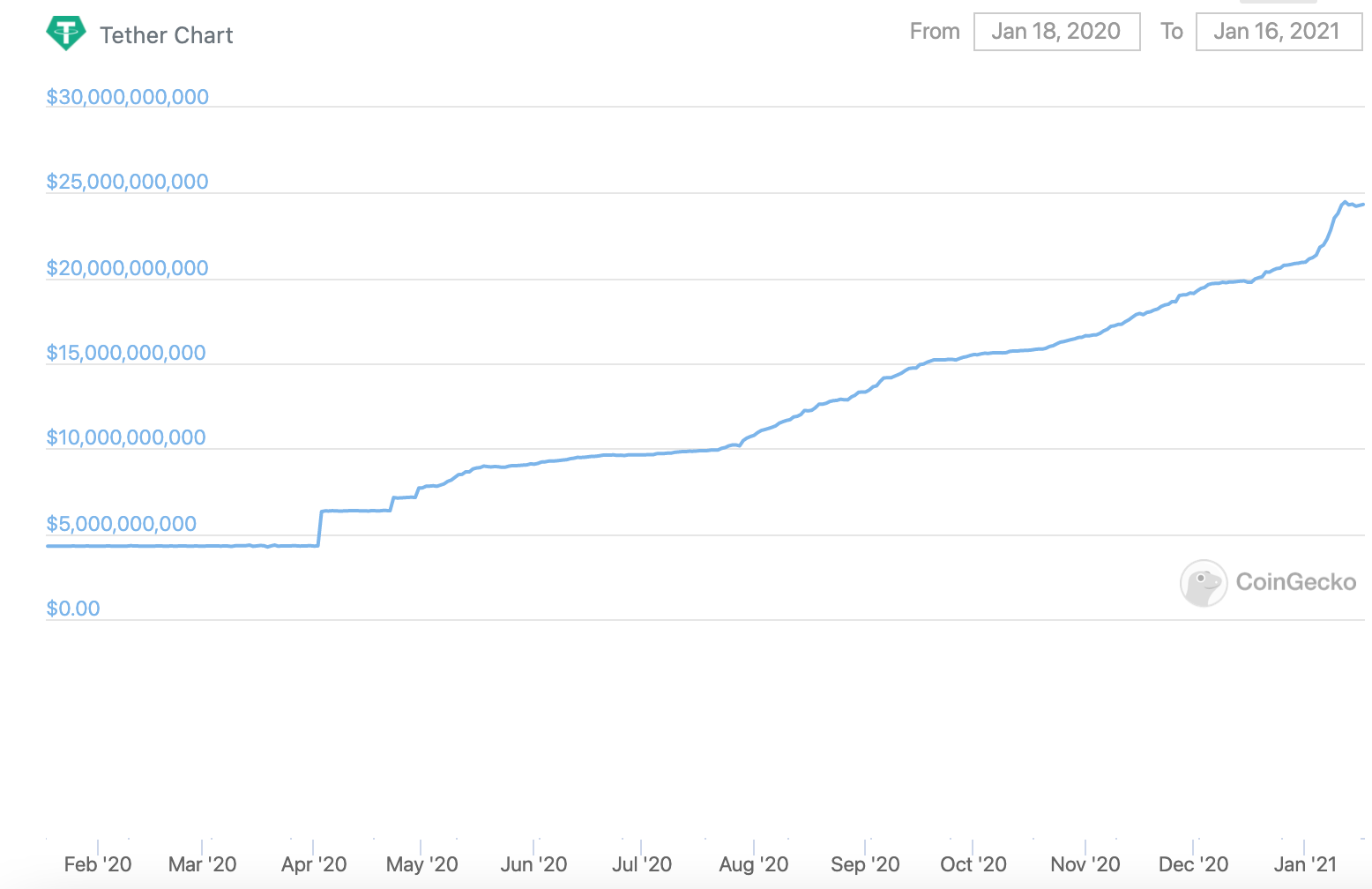 
The amount of money being invested in stablecoins continues to increase with the largest stablecoin, Tether (which is pegged to the US$), now being capitalised at over $24 billion. Worldwide, other governments apart from China are waking up to the potential offered by digital currencies. In the UK, we have seen Her Majesty’s Treasury (HMT) issue a consultative paper looking at crypto assets and stablecoins. HMT is considering the introduction of a new category of regulated tokens to be known as ‘stable tokens’, i.e. tokens backed by a fiat currency. The Treasury is also looking at introducing regulation for those organisations involved in the creation and managing of this type of asset. Indeed, according to Christiane Lagarde, former Managing Director of the IMF and now head of the European Central Bank, it is likely we will see a digital Euro within 5 years. Meanwhile in the US, Christopher Giancarlo, former chairman of the Commodity Futures Trading Commission (CFTC), has set up an organisation to look into the framework and potential of a digital dollar. With all this in mind, in the next few years it is highly likely that we will witness many more CBDC’s being launched, as well as even non-governmental organisations issuing their own digital currencies.