The recent surge in the price of Bitcoin will no doubt be spurring on those who have access to cheap sources of electricity since Bitcoin mining requires a huge amount of electricity. Every ten minutes 6.25 Bitcoins are created which, at $41,000, handsomely rewards the successful miner over $256,000. However, as to be expected, alongside these potential profits we are seeing much confusion globally and some unexpected consequences.

There is a hidden story about Bitcoin mining. A ‘hash’ a term used to refer to an algorithm which converts an input of letters and numbers into an encrypted output (hence crypto). These are, in effect, the building blocks of a number of cryptocurrencies including Bitcoin. According to the Cambridge Centre for Alternative Finance, research has revealed that 76% of ‘hashers’ use renewable energy. Miners also use renewable energy to power their activities, with hydropower being the number one source at 62%. However, the 76% (above) refers to the share of hashers who use renewable energy as part of the production of Bitcoins. Indeed, it estimates that only 39% of hashing’s total energy consumption comes from hydroelectricity, coal (38%) and natural gas (36%). The Chinese, with over 60% of Bitcoin capacity, have used renewable energy for much of their Bitcoin production. In China's rainy season (June to October) 'green' powered provinces such as Sichuan and Xinjiang have hydropower plants capable of providing cheap electricity prices for Bitcoin mining operations. The location of Bitcoin mining is often driven by other factors. For example, in Russia, Gazprom is now selling surplus cheap gas to Bitcoin miners whilst the Venezuelans, as a way to get around international sanctions, are mining Bitcoin as a way to generate much-needed foreign reserves. 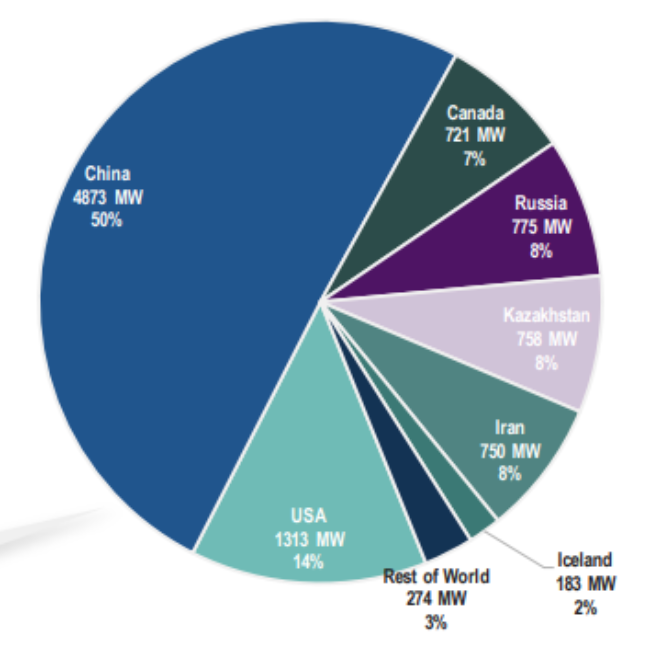 
There would appear to be a close correlation between where Bitcoin is mined and cold weather, with places such as Canada, Russia, Kazakhstan and Iceland all appearing to have notable Bitcoin mining facilities. As reported by Forbes, Bitcoin mining is being seen potentially as a way to create jobs in the heartlands of America. An example of this is a US- based firm called Core Scientific which runs Bitcoin mining rigs for UK-listed Argo Blockchain PLC (whose share price has risen a massive 981% since BTC prices have doubled in the last month). In December, Argo mined 96 BTC which, at $20,000 at the beginning of December, were worth $1.9million - but at a price of $41,000, would be worth $3.9million! However, heed caution, as Argo PLC is a small cap stock thus may prove to be very illiquid stock to trade. According to the IAG Business School at Pontifical Catholic University of Rio de Janeiro, Bitcoin mining can also be used to reduce the risk of fluctuations in the price of electricity for those looking to build renewable energy facilities. Renewable energy can

provide an alternative source of income when electricity prices are low by diverting electricity to produce Bitcoin, as opposed to selling it at wholesale prices on a country’s national electricity grid.


Ultimately, how and who produces Bitcoins is not straight forward. Undeniably, the amount of electricity Bitcoin uses due to its method of mining/production is considerable, since Proof of Works (PoW) does require significant computing power. This is one reason why other cryptocurrencies, such as Ethereum, are moving away from PoW to Proof of Stake (PoS) which uses a lot less energy. If interested, please see here for four key differences between PoS and PoW. If you think Bitcoin prices will keep rising, then you may indeed wish to start mining yourself. If so, check out this Bitcoin mining calculator.