The stock markets are well overdue a correction as recently quoted by CNN business but, actually, this is healthy and totally natural since we have seen a series of stock market crashes historically. However, what is different this time is there are potentially investors who may turn to new intangible assets just as the tangible physical assets fall. As has been documented in previous editions of Digital Bytes, history can be a powerful teacher. We can go back quite a few centuries to learn that economic strive and turbulent markets are by no means a rare occurrence. In the 14th century, the Peruzzi and Bardi families from Florence had built a fortune on banking, only to face rack and ruin in 1345. The two families had been supporting King Edward III of England’s as financial backers, helping the ruler pay for wars first against the Scottish, and then the French. The King of England’s debts grew and the afore mentioned Peruzzi and Bardi families were eventually made bankrupt since the English king refused to repay his debts! Subsequentially a vacuum of power was left, to be filled by the Medici’s of Florence in later years.

Fast forward through time and we witness a series of stock market crashes and turbulence up to our current day: 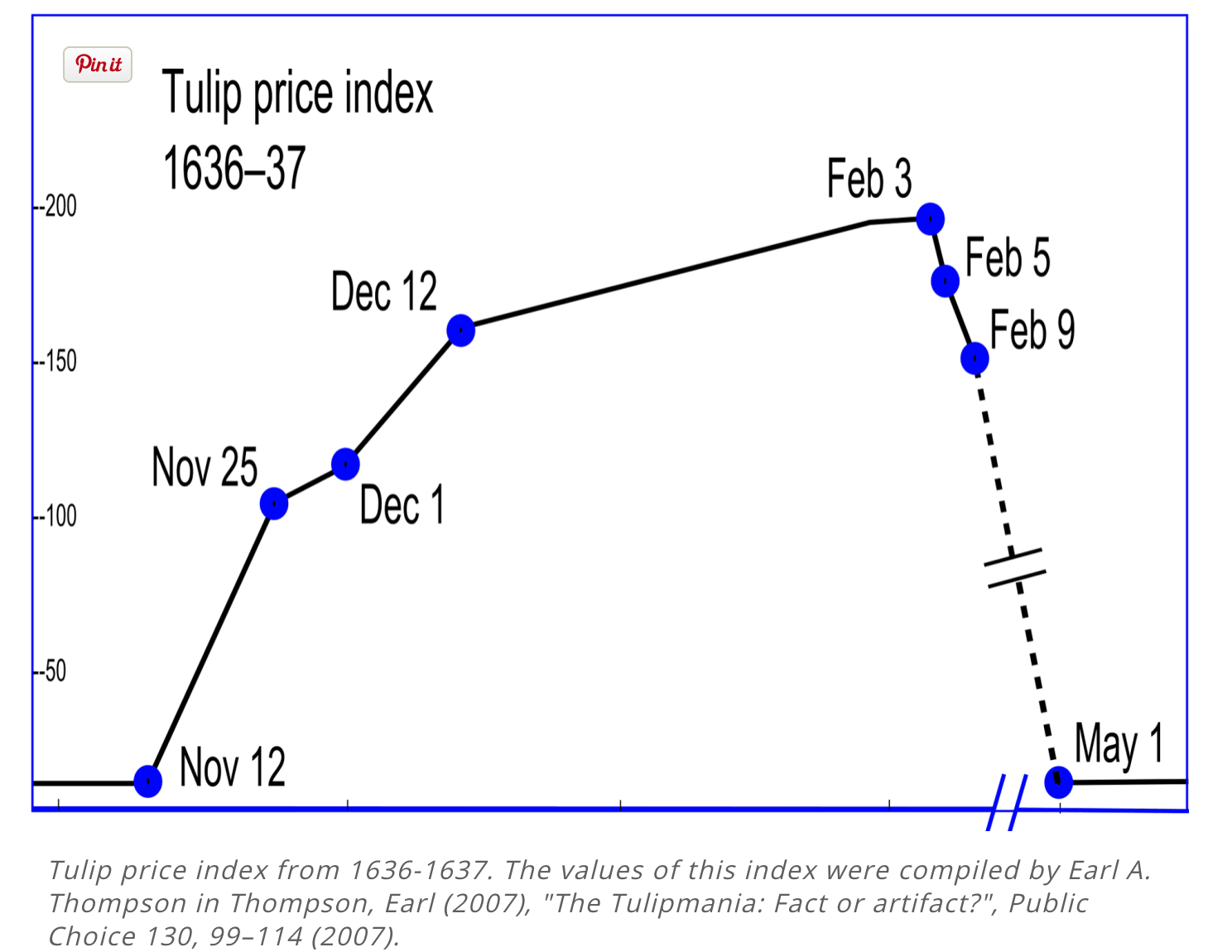 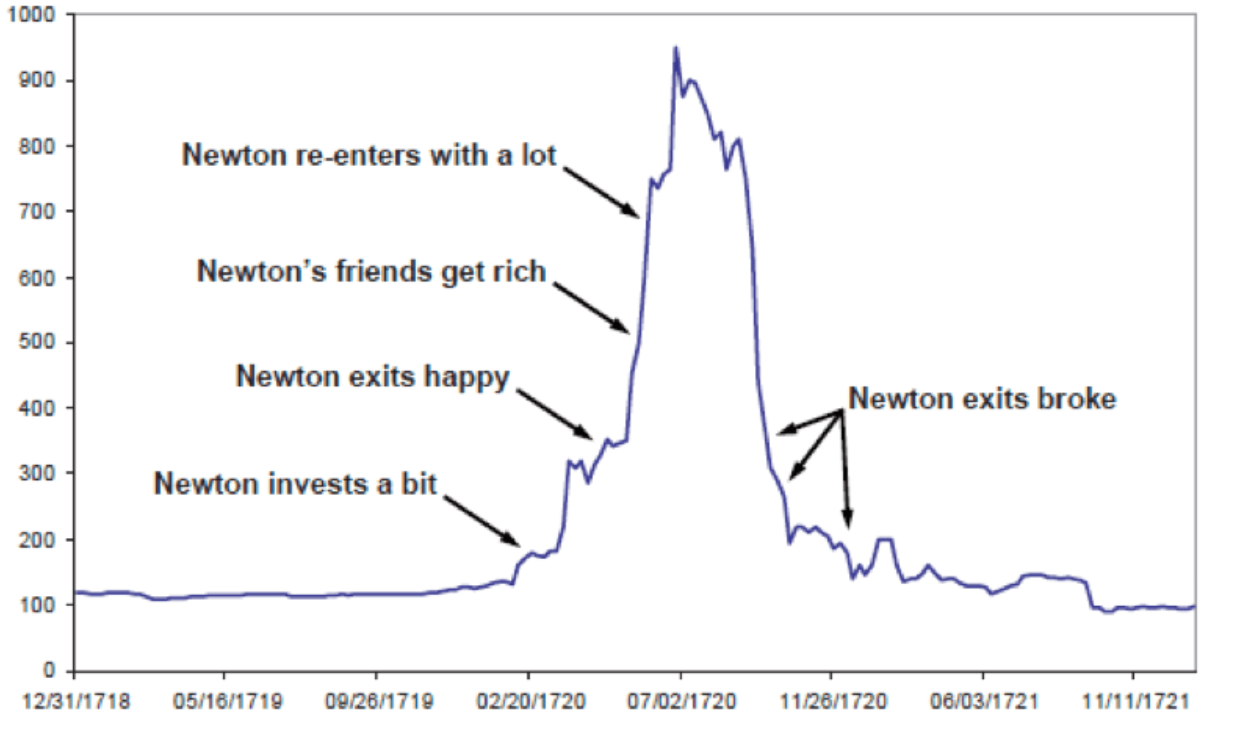 
Arguably one of the world’s finest brains became ensnared in the investment mania which was the South Sea Bubble, personally making a fortune only to hand it all back and losing (what some claim) to be over $4million in today’s money! These were manic times, since the share price of The South Sea Company rose almost 10-fold and in doing so encouraged all manner of crazy investments, including a firm raising money to manufacture a gun to fire square cannon balls! 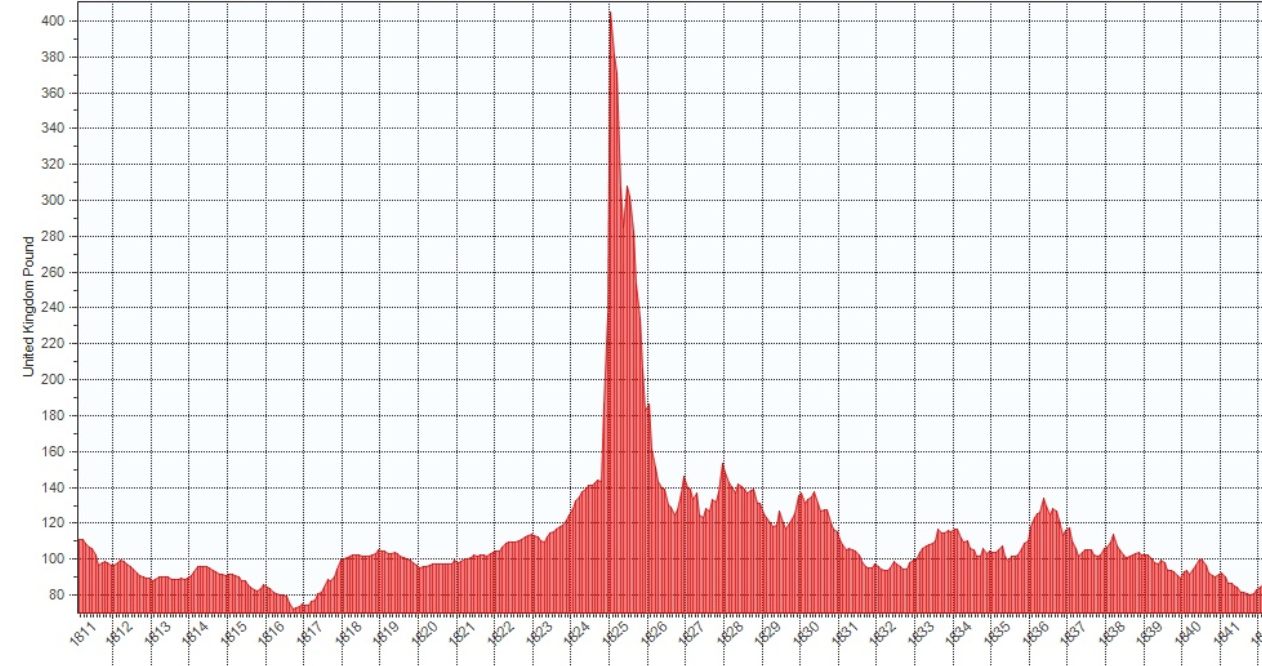 
The defeat of Napoleon at the Battle of Waterloo in 1815 and the advent of peace across Europe was the precursor to a huge rise in the UK Stock Market, reaching its zenith in 1825. Furthermore, this was to be followed by the London banking crisis and a collapse in prices since, in 1816, income taxes were abolished thus leaving the UK government with little income but massive debts from the Napoleonic Wars.


The Wall Street crash in the US ushered-in the 1930’s depression as $billions were ‘wiped off’ equities and stockbrokers on Wall Street in NYC were seen jumping from their offices as losses mounted. However, the market did not fall in a straight line but fell 34%, rallied by as much as 20%, only to continue falling until it had lost over 84% of its value from its peak.


So, what is the relevance of all this? Well, notably, the last of these stock market falls are approximately one hundred years apart: 1630, 1730, 1825 and 1929. Therefore, is it too unreasonable to expect another stock market correction and what is different this time, almost a hundred years on from the last major crash? Points to consider include the fact that the global economy is very different now compared to the past. It is far more interconnected - look at the speed COVID-19 has spread across the globe. International boundaries account for less as people freely live and work where they wish, with an ability to move their money at a whim. Yet more of this globalisation is clearly seen with multinational corporations exploiting favourable tax jurisdictions and low-cost wages, setting up offices and factories in the pursuit of increasing their profit margins.


But nothing lasts forever, and there arguably now exists an over-concentration of wealth in the hands of a few. We could well be at an inflection point and a time of change. According to Credit Suisse, the world’s richest 1% owns 44% of the world’s wealth. Even more disturbing is that, conversely, 56.6% of the world’s citizens own less than 2% of global wealth. There are individuals such as Bezo (Amazon $113billion), Gates (Microsoft $98billion) and Larry Ellison (Oracle $59billion), to name just a few, who are arguably worth more than actual countries! The pace of change seems to be ever quickening as we see the rate of digital adoption growing and impacting on many aspects of our lives. The chart below shows the change in the leading exporting countries world-wide (1970 v 2019) and this three minute video demonstrates how it has changed.


How the worlds’ largest exporters have changed


While we have born witness to the rise of China, how many have been able to invest in successful Chinese companies such as Alibaba, Tencent and JD.Com, all household names in China but relatively unknown elsewhere despite having hundreds of millions of clients? Now it is relatively easy to obtain exposure to worldwide international equities and, as we see traditional equities being made available in a digitised format, it ought to become even easier for someone in Europe or America to invest directly into an Asian, Latin-American or Middle Eastern company. After all, the biggest company in the world is not American, Chinese or European, but Saudi’s Aramco - worth a colossal $1.68 trillion compared to the world’s biggest listed bank, JP Morgan, itself valued at $292billion.


As mentioned earlier, there exists another reason to account for why this time the investment landscape may be different: investors are beginning to focus on intangible assets as opposed to physical tangible assets (included in which are real estate, commodities, equities and bonds). Intangible assets incorporate crypto currencies and also Intellectual Property (Bob Dillan has recently sold his back catalogue to Universal Studios for an estimated $300 million). Even loyalty schemes are on institutional investors radar as seen by JP Morgan entering this market as it is estimated that  US airline loyalty are worth $200billion, making them more valuable than the airline firms themselves. Furthermore, there are the potential investment opportunities in the ‘e-sports’ market (projected to be worth in excess of $1.6 billion p.a. by 2023) as well as data from both inanimate objects such as cars, buildings and animate objects i.e. people. A common thread runs through many of these intangible investments - data. Since these intangible investments are not physical it is vital that, should they be valued and traded, there has to be a secure record of whom is the actual owner of the asset as well as a mechanism to allow these intangible assets to be packaged and then be bought and sold between investors. As an aside, with citizens beginning to be personally rewarded for their data/activity we could well see a redistribution of wealth. Instead of companies such as Alibaba, Google and Facebook etc making a fortune by aggregating and selling people’s data to advertisers, there now exists the technology to pay and reward people to have personal access to their spending habits, preferences and opinions, thus allowing them to earn from their data.

This is why Blockchain technology (and the Digital Assets this technology is able to create and manage) could well prove to be so important in the future. Yes, for sure we will see equity markets tumble at some stage in the future. We are also very likely to see these new intangible assets, along with new digitised versions of traditional tangible assets, being made available to a world-wide investor-base and traded 24/7.