A 2-minute video on Yellen as potentially the next Treasury Secretary, and what could this mean for both inflation in the US and cryptocurrencies.


Jo Biden is looking to nominate Janet Yellen as the first lady to be Treasury Secretary. This could prove to be a clear sign of a more expansionary ‘hand on the tiller’ of the US economy, as Yellen has been pushing for more cash to be injected in the American economy in the wake of the economic damage wreaked by COVID-19. Will an even bigger increase in the money supply lead to greater inflation? Will this, in turn, result in more people buying and pushing up the price of BTC?

Janet Yellen at a congressional hearing in 2017- bet she wished she had bought BTC! 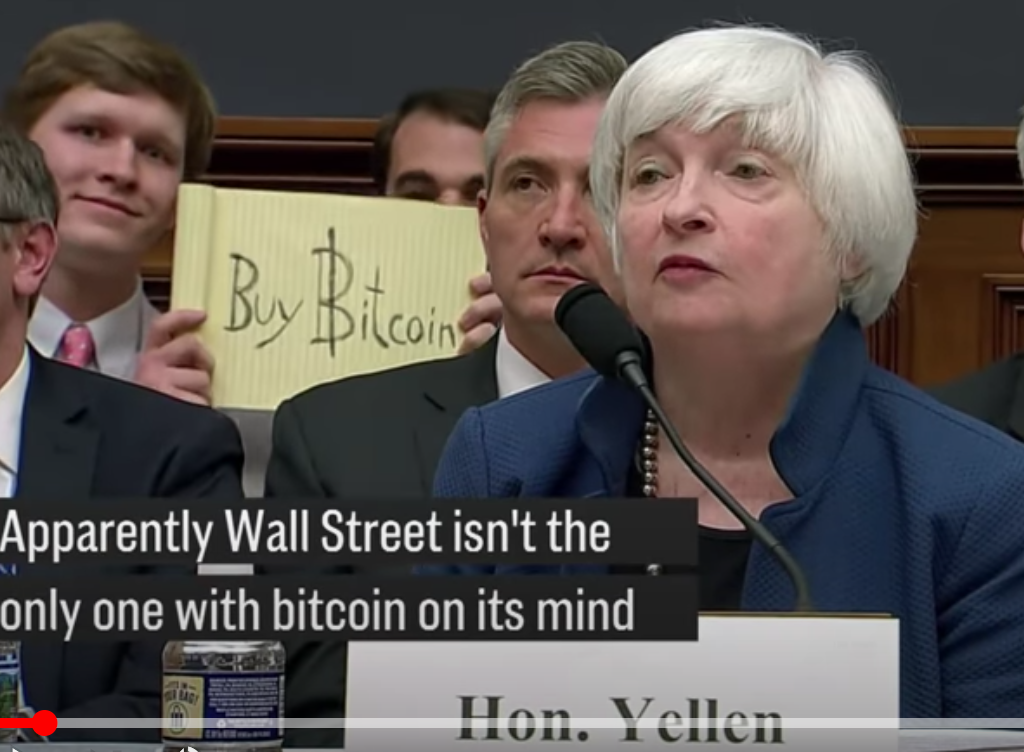 
In the past Yellen has not been a fan of cryptos and made that very clear when she was Fed Chair speaking to the House Financial Services Committee on 13th July 2017. She was ‘photo bombed” by a Bitcoin fan, holding up a message “Buy Bitcoin”, who allegedly was subsequently sent small crypto donations worth the equivalent of 7 Bitcoins. Those 7 Bitcoins would have been worth approximately $16,000 back in the summer of 2017, compared to today’s value of over $131,000. One might suspect Yellen did not take the photo bomber’s suggestion. Or maybe she did since she has said very little in public about cryptos in the last few years!


One muses that with Yellen’s classic Keynesian economic training she will favour another significant injection of cash into the US economy. Reuters has reported she is “someone who normally favors looser monetary policy to reduce unemployment”. Given the current almost 0% interest rates, it will be interesting to see how supportive Yellen will be towards a US Central Bank Digital Currency (CBDC) so that the US government can, in effect, give money to those most in need. To have a ‘new tool’ to stimulate the economy in a focused manner, as opposed to ‘helicopter cash’ i.e. giving cash to many and additionally having to pay the banks to distribute it for the government. A CBDC would make it possible to make payments incorporating the stipulation for it only to be spent on certain products and services within x weeks as opposed to be being saved, which would seem to have happened earlier this year. The Wall Street Journal reported that the US personal savings rate soared to 33% between Feb-April 2020  so, in effect, the US government increased its indebtedness whilst its citizens repaid theirs. If inflation were to return, then a transaction fee could be levied on those using a CBDC as a method to slow down the circulation/speed of money in the economy.


Who knows how much Yellen takes counsel from her Nobel-prize winner husband, George Akerlof, who wrote a paper called the ‘Market for Lemons’? In it he says, “If a market has substantial “information-asymmetry” (sellers know a lot more about the good than buyers -e.g. 2nd hand cars), it will come to be dominated by lemons (bad cars)”. Since one of the challenges cryptos face is the perception caused by many of the 5,000+ ill-conceived ICOs which were launched in 2017 and 2018: many, at best, were ‘iffy’ and, at worst, fraudulent. As reported by the publication, Finance Magnet, the SEC has, “since May 22017, with its 4,500 staff, revealed over 2,750 enforcement actions obtained over $14 billion in financial remedies and paid around $565 million to the whistleblowers in the same period.”


It is extremely difficult for ‘Joe Public’ to have a complete understanding of cryptos, let alone the new-fangled DeFi sector and, in turn, make an informed opinion. But times are changing with more independent analysis and research being produced and we are seeing digital currencies being embraced, not by cyber punks and start-ups trying to bypass financial institutions, but by global corporation and governments. The Chinese have launched a CBDC and, in an announcement from the Chancellor of the Exchequer, the British government has talked of openly about its support of digital currencies as new, cheaper and more efficient methods of payments. The UK support ought to be of no surprise since London accounts for 40% of the global daily Foreign Exchange (FX) transactions and, in a BREIXT environment, it will not want to lose the valuable FX revenue and taxes it creates. Will Yellen prove to be as supportive…..?