In the US there has been a dramatic decline of Initial Public offerings (IPOs) with, according to the Economist, the average number falling between 1975- 2000 from 282 p.a. to only 118 between 2001-2019. According to Forbes, “The average age of a company going public these days is 12 years. In 1999, the median age of a company at IPO was just four years.”

One of the reasons for the decline in IPOs is the huge amount of capital that Venture Capital and Private Equity funds have managed to attract over the last few years. This has meant that, instead of floating on a public stock market, firms have turned to VC and PE investors to raise capital. According to Ernst & Young, only 12% of firms that have been sold by PE firms have carried out an IPO - the remainder have been typically sold to trade competitors. Those firms which have carried out IPOs are usually able to recruit more staff as they expand and grow (as the chart below indicates) with IPOs not only offering companies access to staff, but also enabling private investors to have access to invest in what will hopefully be the next Amazon, Tencent or Google.


Certainly, there are signs that change is on the way as seen with the announcement that INX is about to float, having received regulatory permission from the SEC in the US. Indeed, INX will, itself, be the first Security Token Offer (STO) which can be sold to private investors in the US. Interestingly, the cost to INX for carrying out its IPO was only $6 million (i.e. just over 5%) compared to the average price of an IPO being 9% to 24% according to PWC. Clearly change needs to come given these massive IPO costs and the decline of IPOs. It is not just in the US that digital exchanges are being given permission to launch. In August 2020, the FCA in the UK granted approval to Archax and Gemini to offer regulated exchange services for Digital Assets. The ability to buy Digital Assets on a recognised exchange was one of the key parts of the regulatory infrastructure which has been missing for asset managers. Gemini is already trading in a variety of jurisdictions such as Canada, Hong Kong and Singapore, with Archax meanwhile claiming it has 35 assets that it wishes to start trading. As a result, Archax will enable these to be traded digitally and made available for external investors, which will potentially make the assets easier to invest into by third parties.


An alternative to an IPO is when a company carries out a ‘private placement’ and typically sells some of its equity, not via a public offering but through a private offering, to a small number of selected investors. This method of raising capital usually negates the need for an underwriter thus involving less costs but, even so, as the chart below indicates it is still potentially 40% more expensive than carrying out a STO. 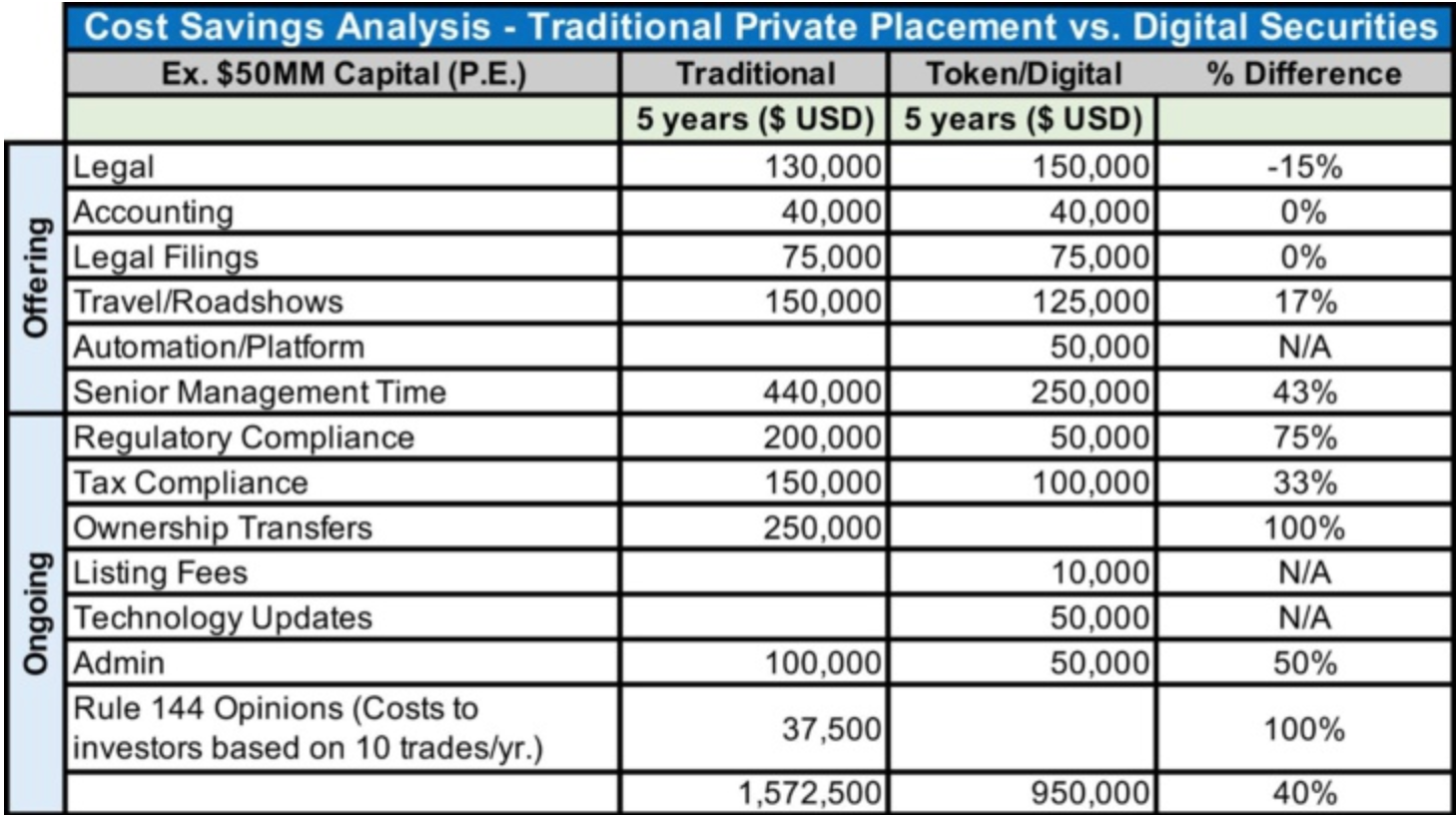 
One of the biggest cost savings claimed above is ‘Ownership Transfers.’ These refer to the costs required for a transfer agent who keeps a record of share transaction and dealing with shareholders i.e. issuing, cancelling, handling lost share certificates and investors mailings (such as sending copies of interim and annual accounts). This is a good example of how digitisation helps disintermediate traditional advisors, thus saving companies’ and, ultimately, shareholders’ money. Possibly it is of even greater significance, digitised securities allow exchanges and regulators to be able to monitor shareholder activity in real time. Therefore, in theory, using smart contracts regulators can identity suspicious activity and report directors dealing i.e. bring far greater transparency. Currently, if you wish to see who the owners of a publicly traded company on any stock exchange in the world are you are required to wait until the stock exchange (where the shares are traded) is closed, the share registrar updated and the records adjusted for any transactions having occurred during the day…… 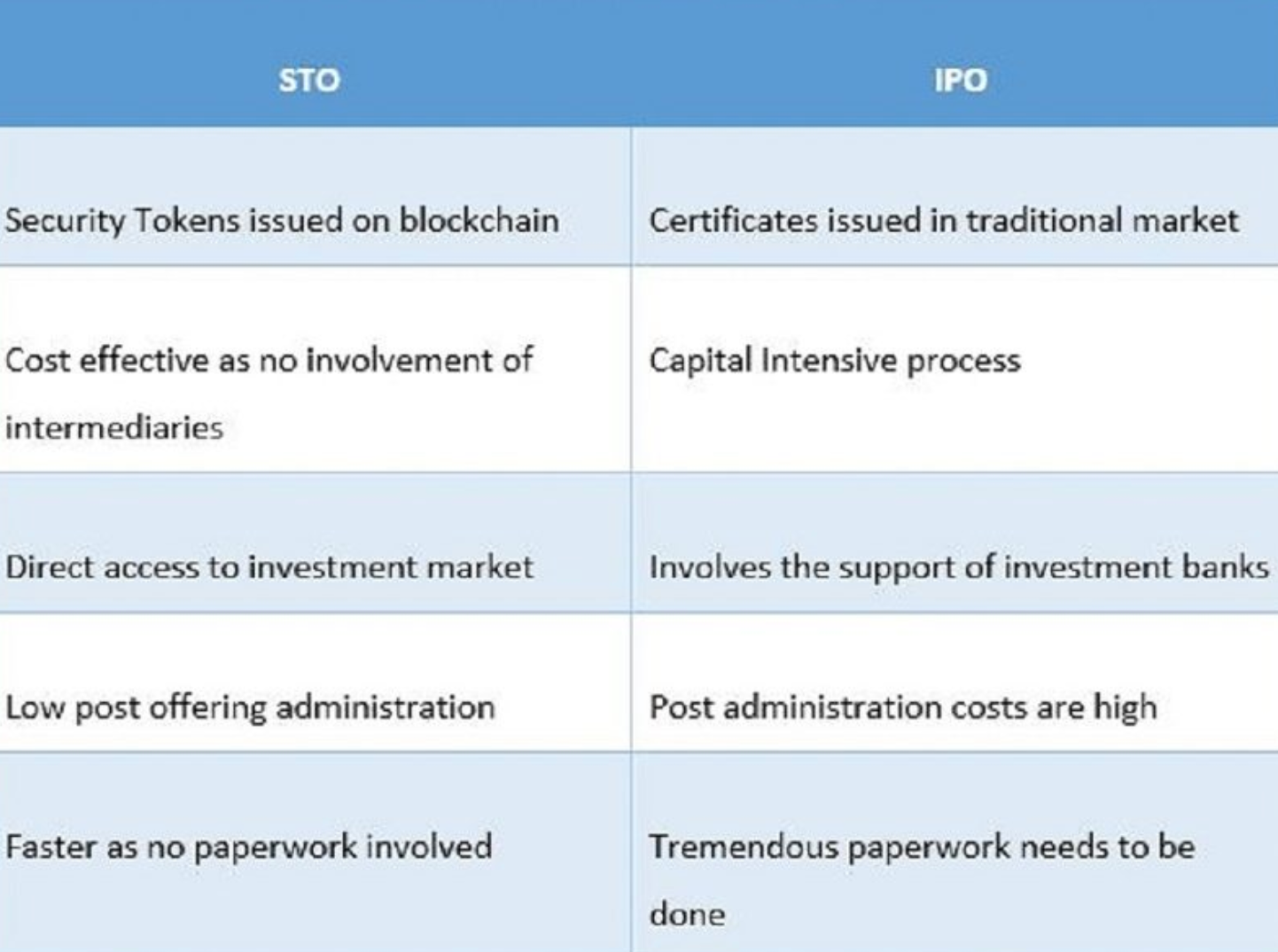 There are several reasons why an STO is seen as being more favourable than an IPO, which include:


The activity of the IPO market in the US and Europe has been declining over the last few years while the emergence of STOs has been seen as a means of raising capital. As we witness greater institutional engagement (on the back of more digital exchanges and custody and banking services being launched), it will become easier for asset managers be more active and help increase liquidity, which will be vital for STOs to thrive.