Farming is big business, with some estimating that the global food and agriculture market be worth over $6 trillion. While the sector is massive it also faces increasing regulatory pressure from governments and demands from customers as to a farm’s sustainability and the impact it has on climate change. These pressures are encouraging farmers to rely more and more on technology and thus become digitised by using Artificial Intelligence, Blockchain, cloud storage, drones, tractors powered by GPS navigation, Internet of Things, Machine Learning, robotics and sensors. The use of these technologies is revolutionising farmers across the world so improving crop yields, helping to improve the efficiency of water use, reducing the use of harmful chemical pollutants (such as pesticides) and offering consumers the ability to track and trace produce from field to fork.

Interestingly, as part of the EU’s landmark €750 billion ($885 billion) COVID-19 recovery package it was agreed €15 billion ($17.7 billion) was to be allocated for the European Agricultural Fund for Rural Development so as to help in the digitisation of agriculture across European farms. This funding was also designed to help meet the EU’s agriculture sector plans in order to achieve its ‘Green Deal’ targets. 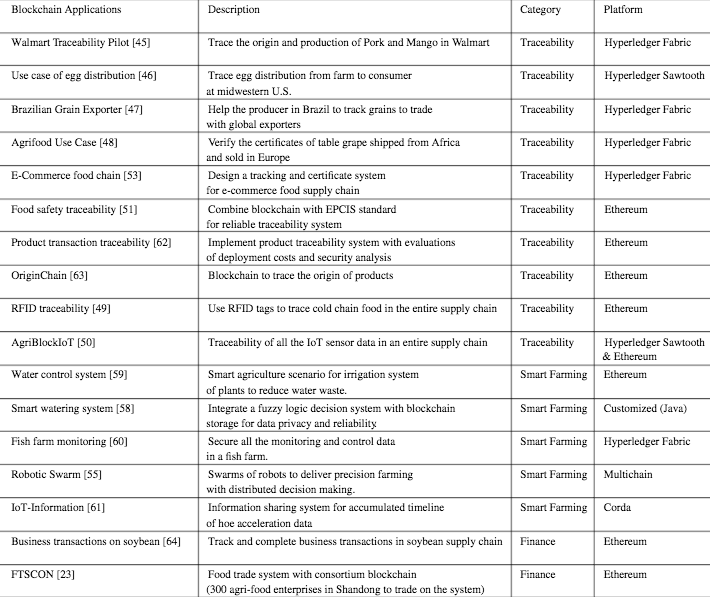 
The drive for digitisation on farms has encouraged a number of companies (see above for examples) to offer services to the agriculture sector helping them to digitise operations and often at the same time become more environmentally friendly in their farming techniques. The above chart gives examples of the various types of applications of how Blockchain technology is being used and that, notably, various Blockchains are being used already. Nori is an example of a US-based start-up which uses Blockchain-powered to incentivise farmers to reduce carbon and earlier this year attracted $1.3million of funding. Nori is to issue a cryptocurrency and intends to pay farmers who ‘lock up’ carbon in the soil by using sustainable farming techniques which promote the growth of microbes and bacteria in topsoil. The logic behind Nori’s cryptocurrency is that, while governments set the price for capturing carbon (sometimes referred to as carbon credits), its CEO, Paul Gambill, believes that “if we want people to do something that is going to pull carbon out of the air, the simplest way to get them to do it is to pay them”. One of the first farmers in the US to use Nori is Terry Hill, from Maryland, who received $115,000 to capture and store 8,000 tons of carbon in his farm’s topsoil and who now could potentially earn up to $150,000 a year demonstrating how Nori is able to offer an additional income for those farmers its company works with.


Meanwhile, the agriculture sector is fast becoming digitised, driven by government legislation and customer demand in order to be able to track and trace the provenance of the food we consume. Blockchain technology, with its ability to offer greater transparency and therefore trust in what can sometimes be complex supply chains spanning across different continents, is a great tool to help farmers assure their consumers. As is often the case, Blockchain technology is even more effective when it is used in conjunction with other technologies such as AI, IoT, QR codes, RFID tags, etc. Although it is still early days as governments, processors of foods, farmers, retailers and consumers gain access to more structured data which, in turn, can be interrogated and used by each of these parties for their specific needs, we will no doubt discover additional new ways in which digitisation can help the agriculture industry.